As with most of the quilts I made in 2013, this quilt was an exercise in fabric management. I wanted to make a quilt with what I had and buy as little fabric as possible, so that required a design that maximized what I had in an aesthetically pleasing manner. Plus, orange fabric is not easy to come by, let alone matching it something you already have, nor was this shade of pink, of which I only had half a yard. 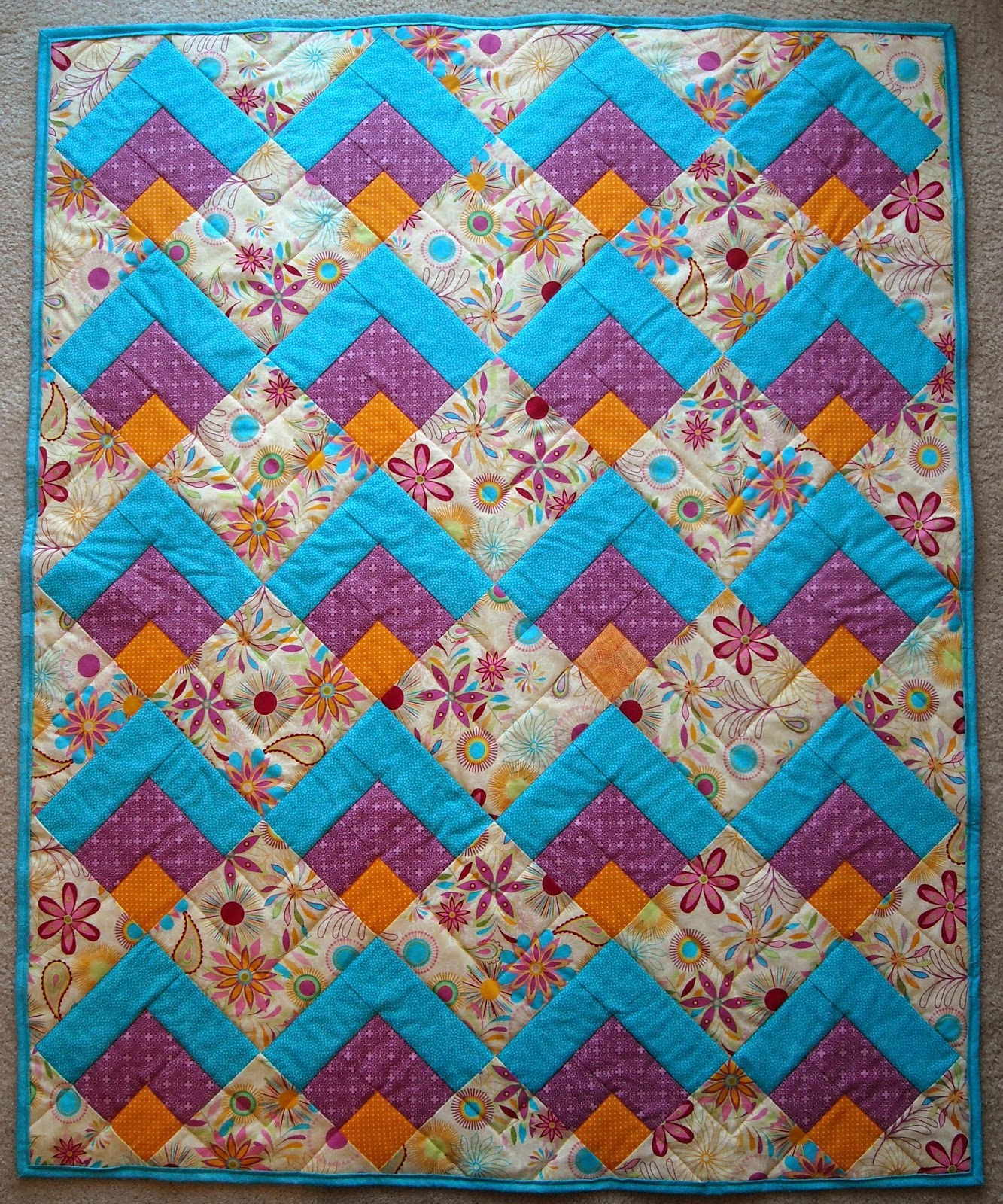 One of these blocks is not like the others. Can you find it? Unfortunately, it didn't end up in the spot I intended it because I wasn't paying attention. It was supposed to be one block down from where it is. Originally the blocks were going to be in a straight 5 x 7 layout so I was only going to need 17 orange squares. Then I decided to a make a larger quilt by putting the blocks on point, which meant I needed three more blocks and I only had enough orange polka dot fabric for two more blocks. 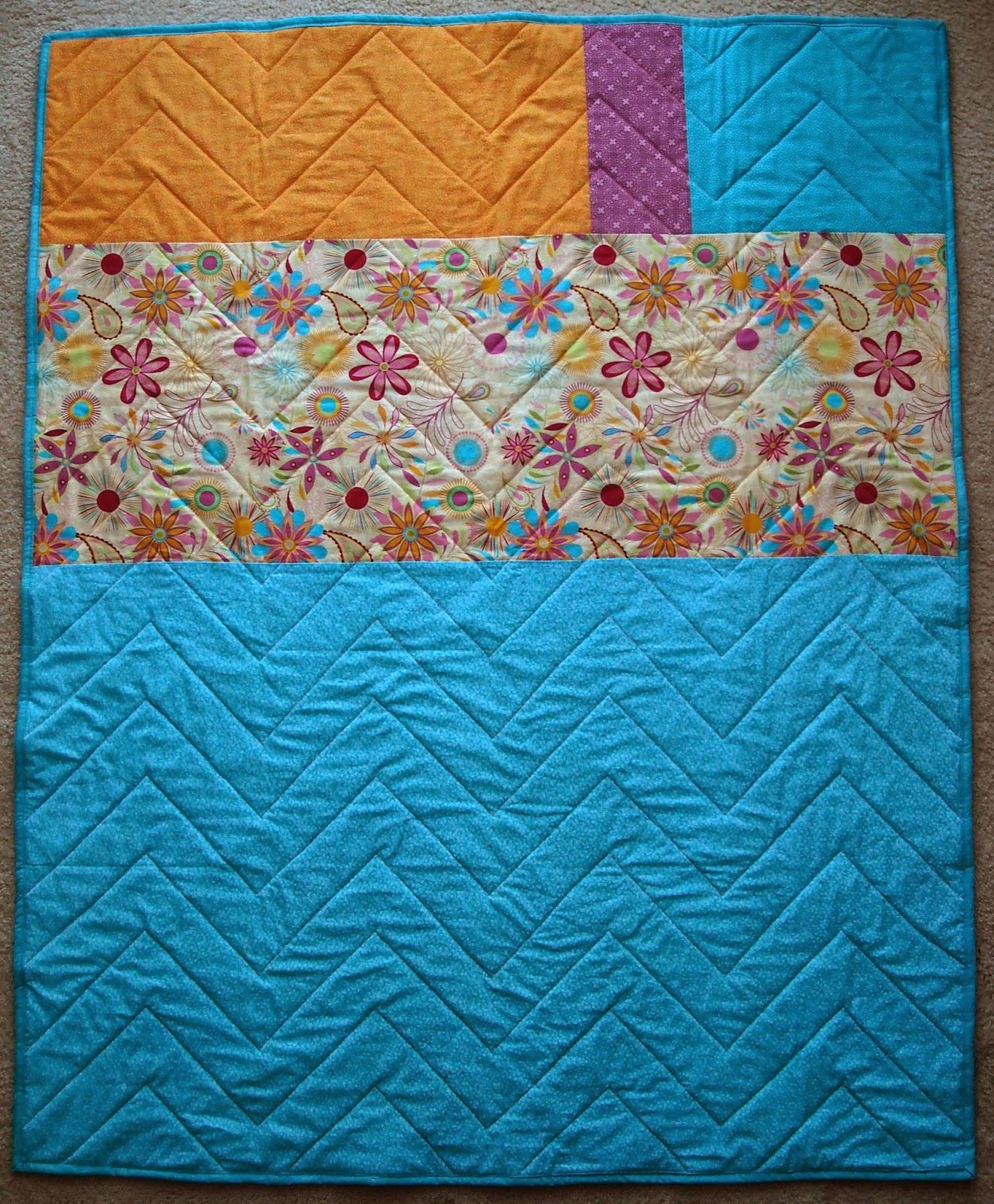 I often piece together quilt backs to make them interesting, but this one had to be pieced in order to make it large enough, as I didn't have enough of any one fabric left and I didn't want to buy more. It worked out nicely in that I had other coordinating orange and blue fabrics. It was not large enough to use as binding though, so I did have to buy some fabric to bind it. I used single fold binding cut at 2.5" and it turned out nearly perfectly. Though all slightly different, this is my third zig zag quilt in a row (one, two), but it just worked so nicely with the design.

New items purchased to complete this quilt: batting and fabric for binding 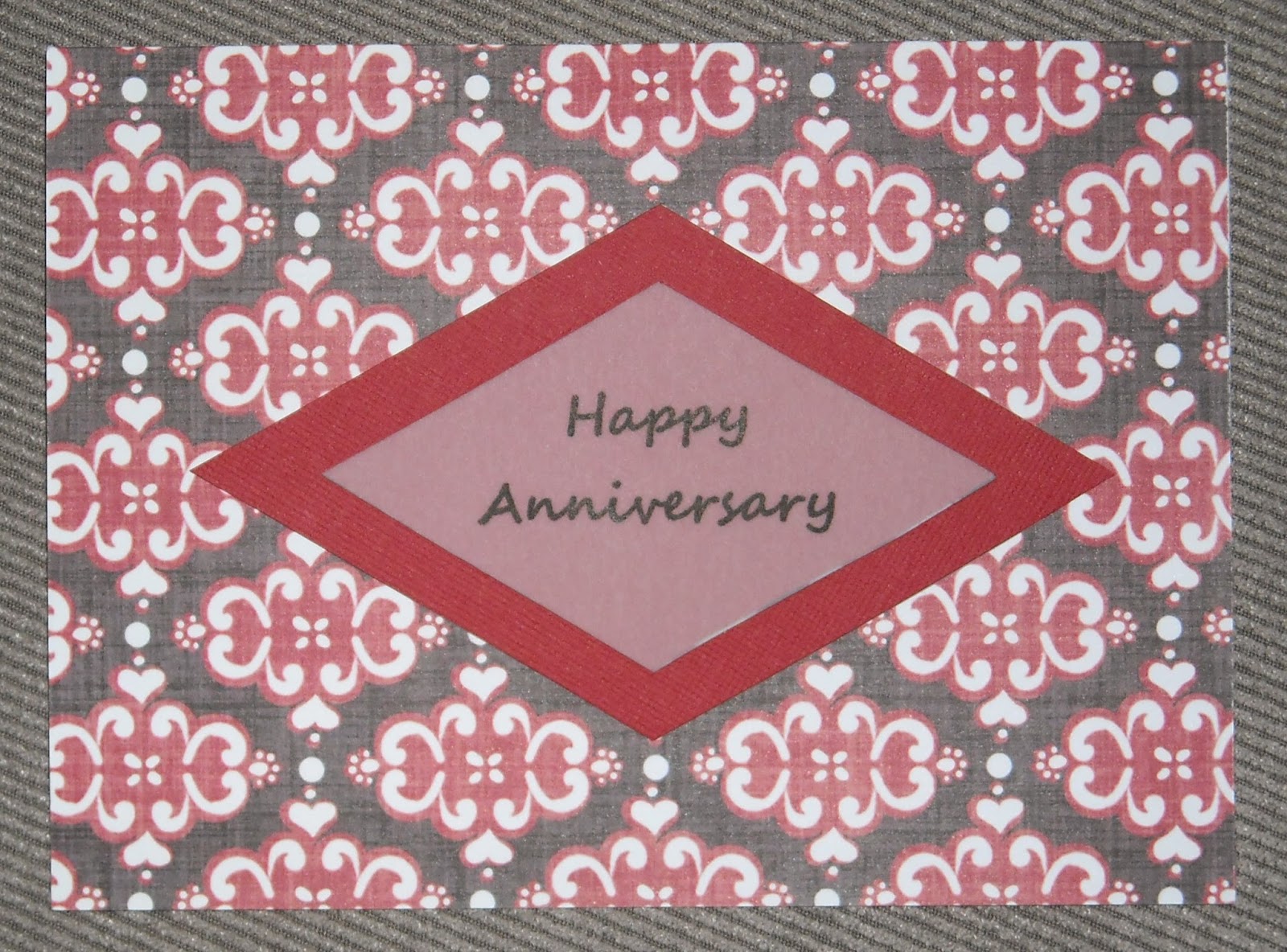 This year's anniversary cards for my parents and Zack's grandparents.
Posted by Sam on Saturday, June 21, 2014 1 comments 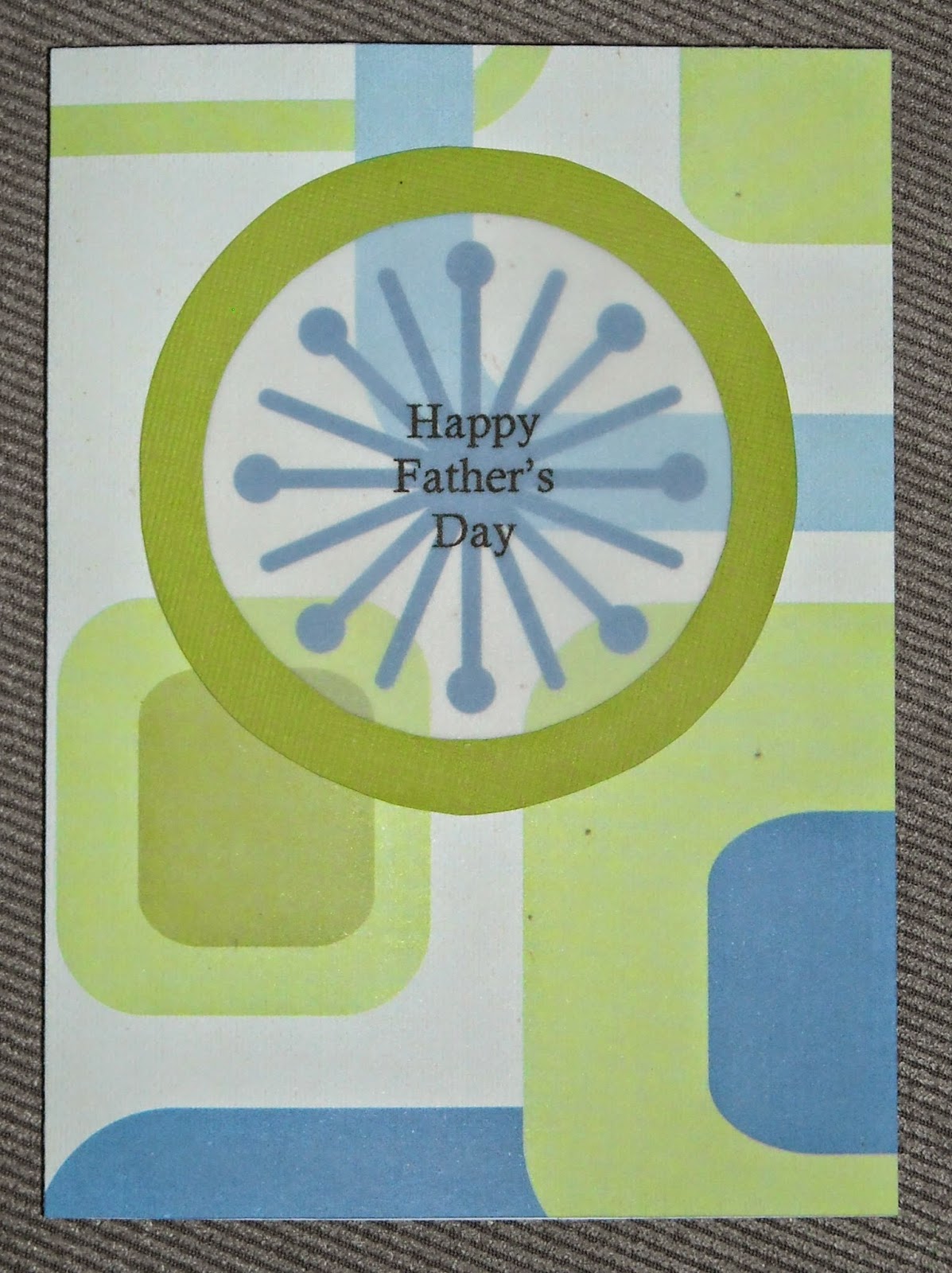 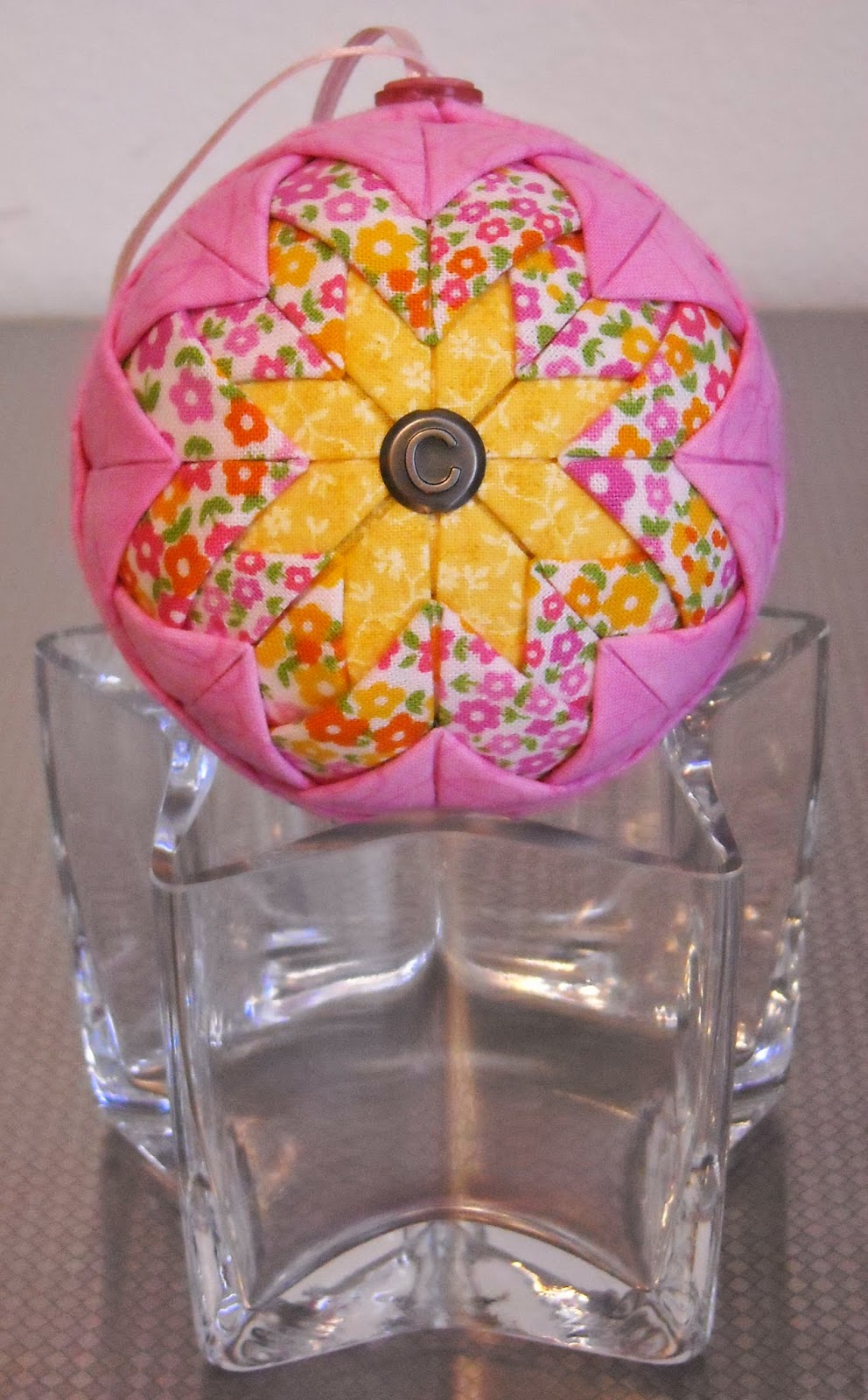 This ornament is for the little sister of the girl who will receive yesterday's ornament.  She was also the recipient of the flannel owl blanket.

Try making one yourself with this tutorial.
Posted by Sam on Sunday, June 08, 2014 0 comments 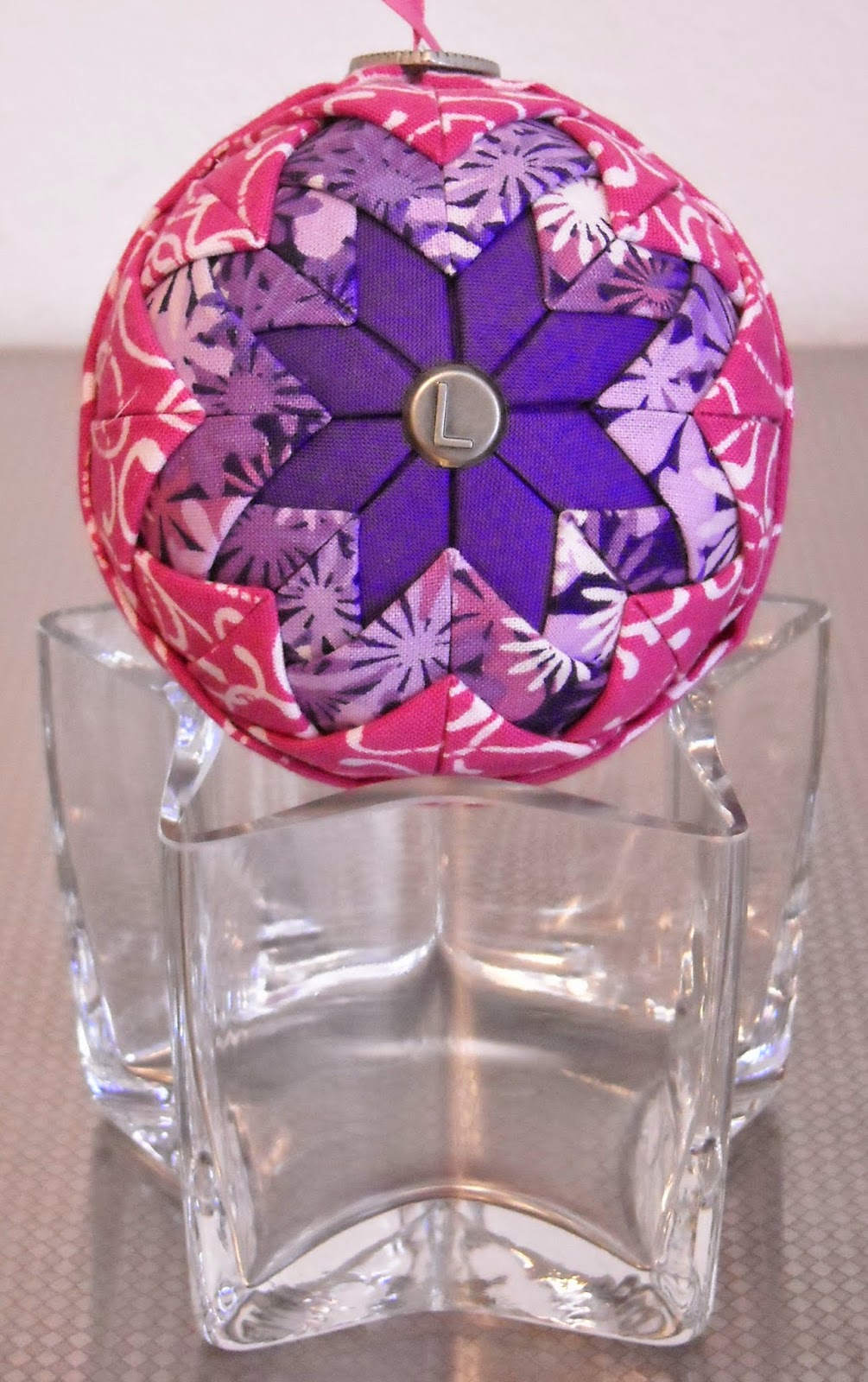 This ornament is for the other little girl my mom babysits for. I was tempted to make it the same as the first ornament, but I had so many pink fabrics to choose from, it seemed silly to duplicate, though this pink fabric also appeared in a previous ornament.

Try making one yourself with this tutorial.
Posted by Sam on Saturday, June 07, 2014 0 comments 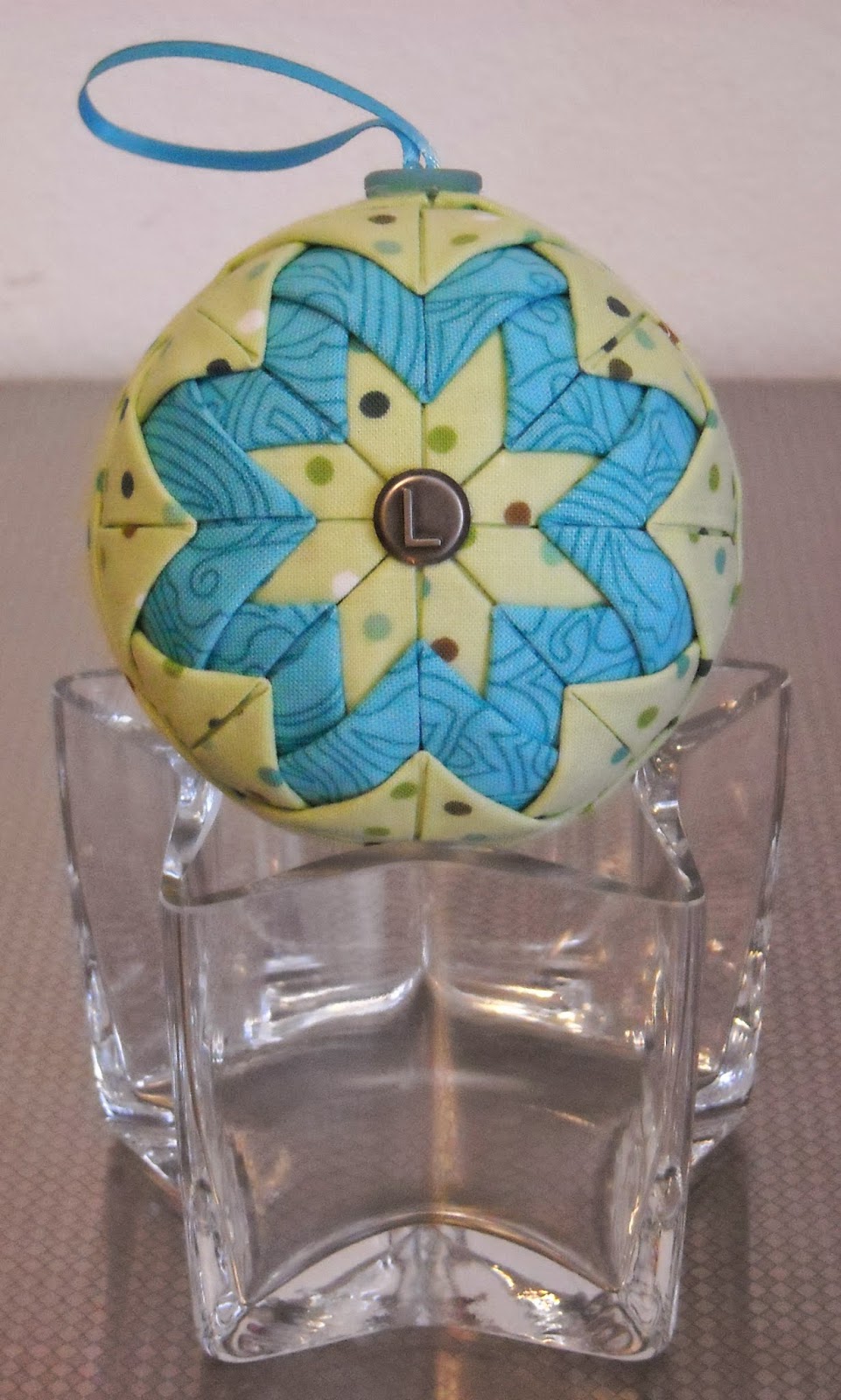 This is for the little brother of the girl who will receive yesterday's ornament. While struggling to pick out little boy appropriate fabric from my stash, I realized I've only made one other ornament specifically for a little boy, with a very similar color scheme.

Try making one yourself with this tutorial.
Posted by Sam on Friday, June 06, 2014 0 comments 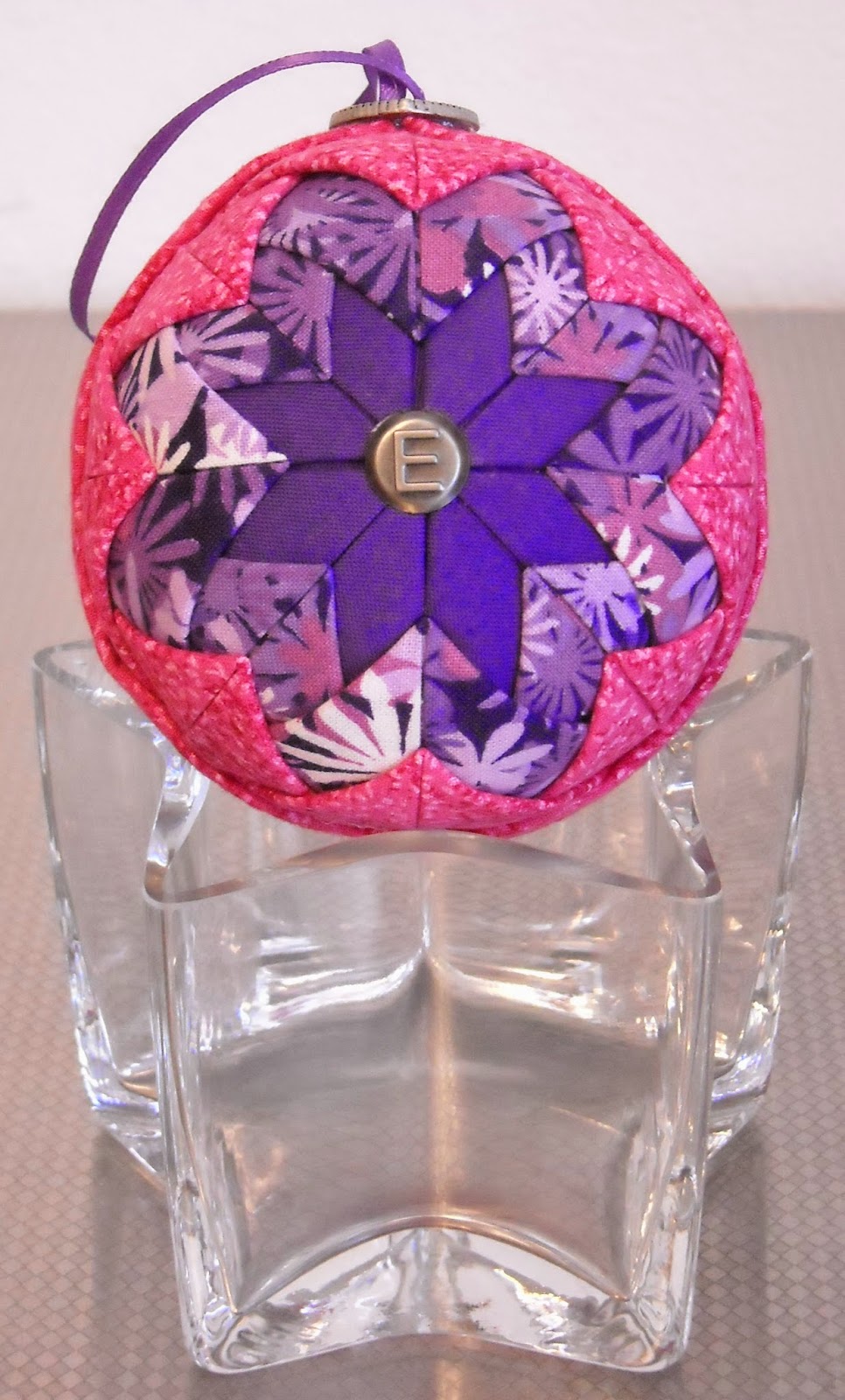 When my mom saw the ornament I made for Julie's baby, she suddenly needed me to make an ornament for each of the four kids she babysits. I was pleased to have the perfect use for this purple fabric. This one is for the first little girl she started babysitting, who also received the owl quilt.

Try making one yourself with this tutorial.
Posted by Sam on Thursday, June 05, 2014 0 comments

I love my reusable shopping bags. A while ago I started looking for reusable produce bags, but I couldn't find any. I even checked specialty kitchen stores when I traveled. I found some on Amazon, but I didn't really want to pay $12 plus shipping for the set of 5 that I liked best. Fortunately, I realized I could just make some out of a drawstring mesh laundry bag. The laundry bag was 24" x 36", so I got six bags out of it. Since it cost $2, it was quite a deal. 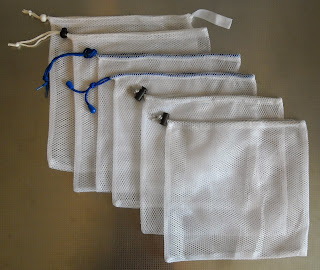 I cut the laundry bag into three sections, and then cut down the middle of each. For the top part, I trimmed carefully around the cord, then cut the cord so it was equally distributed between the two pieces without getting pulled out. The two bags from the top are about 12"x12" since the drawstring part was already included. The bags from the middle and bottom are about 11"x11". A straight machine stitch held the mesh together just fine, despite being holey. They are all big enough and strong enough to hold a week's worth of apples, though you might want to make them different sizes depending on the type of produce you usually purchase, as some produce would benefit from longer, more rectangular bags.

For the ones that needed the drawstring part created, I sewed with the cord into the tunnel rather than try to pull it through such a holey fabric. Conveniently, I had four pieces of scrap cord. Two were handles from a gift bag. One was a cord from a conference name badge. One looks like a shoelace. I'm not sure where that came from. They are both a bit long, but I like the aglets. If you had to buy cord, you would only need about 2' per bag.

The laundry bag had a cord lock on the end, and I had three more that had been salvaged from other items, so I added those, though they are not really necessary. After using the bags this weekend, I will probably remove the cord locks. Since I only had three, two of mine don't have them anyway. Of course Zack's first concern was the added weight, but I am not terribly concerned. I made them more to eliminate waste. To make them lighter, you could definitely skip the locks and user lighter weight cord. Plus, not all produce is sold by weight and not all of it requires a bag either.
Posted by Sam on Monday, June 02, 2014 0 comments