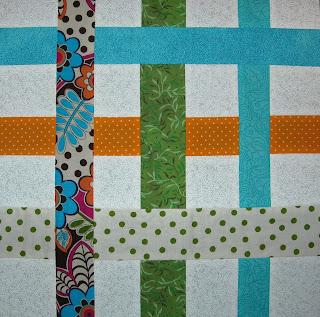 I've since taken apart most of the original 51 quilt blocks, so I didn't think I'd need to make another. However, I finally figured out a plan to turn the Quilt Block Project blocks into a quilt. I had 14 blocks left, so I needed 6 more to make a nice 20 block quilt top. I saw this Simply Woven quilt block on Moda Bake Shop and knew it would be perfect, as I have an abundance of strips:

I realized that I really should make a strip quilt goal #7 this year.
Posted by Sam on Sunday, January 10, 2016 0 comments

I don't usually set quilting goals, but I thought I would this year since I'm still working on the scrappy goals I set in June. In 2013 my unofficial goal became to make quilts from my stash as much as possible, but I didn't have specific projects in mind to complete.


Goal 1: Another scrap quilt. It's already in progress so I am fairly confident I will complete it. (Update: In April we moved to a new state 1400 miles away, so the June baby quilt will take priority!) Finally finished! May 2017. 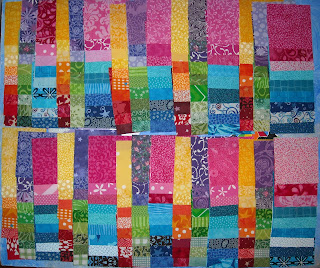 Goal 2: Baby quilt for my friend who's due in June. Sibling to the Shark and Elephant quilt recipients. We'll see if it's another boy. Can't leave the third kid without a quilt, so this will definitely be completed (though if it's a girl, I do already have a quilt that still needs a home). Update: It's a boy! (Found a home for the rainbow quilt before we moved!) Done! June 2016.

Goal 3: Finally make a quilt with the remaining blocks from the Quilt Block Project. I made 51 blocks, and I now have 14 left. I took most of them apart, though a couple made it into quilts. I actually have a plan to incorporate many of the 2.5" squares I'll still have even after completing the second scrap quilt, and I think having a plan will go a long way toward actually making progress on this quilt. Update: Done! February 2016.

Goal 4: Brainstorm and research what to do with the hexagon blocks. I may not actually start any sewing on this quilt, but I do plan to at least do some planning. Update: Returned to Amanda. April 2018.