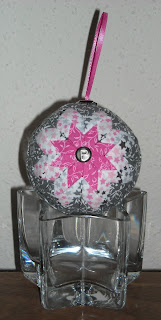 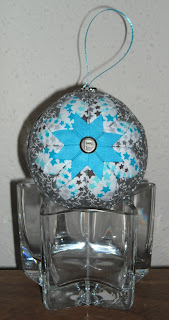 Since Styrofoam balls come in packs of six, I try not to make these ornaments one at a time because I don't want to store a bunch of extra balls. So after I made two more ornaments for the kids my mom babysits, I had to find more recipients. Conveniently, one of my friends was expecting a second baby in September, and I hadn't made his first baby an ornament. I knew I had a P brad for their daughter, but after running out of C brads, and using up all the Es and Ls as well, I was concerned about what they might name their son. Fortunately, I had an F. Otherwise, I would have used rhinestones for both. Other than the brad/rhinestone in the center, the blue ornament is exactly the same as the previous blue star ornament, but the pink one is different. Since these are going to siblings, I made them much more similar than the other two, using the same fabric on the outside ring.

Try making one yourself with this tutorial!
Posted by Sam on Sunday, August 28, 2016 0 comments 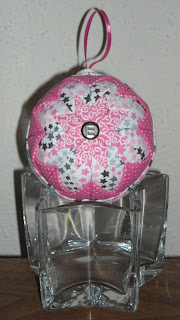 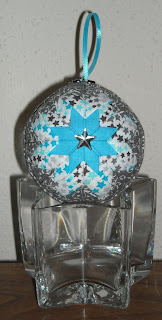 When Claire was born, I made her an ornament, and I also made ornaments for the four kids my mom babysits. That was two years ago. This year, both families had a third baby, so I made ornaments for them as well. One family had a girl, so she got a pink ornament. One family had a boy, so he got a blue ornament. All the ornaments for the older siblings had brads with their initials. However, both sets of kids have names that start with the same letters - each family has an E, L, and C. Since Claire is also a C, the third C baby was out of luck - I was out of C brads and couldn't find them anywhere. I went to two Hobby Lobbys, I had people looking in other states, and nothing turned up online no matter how I searched. So the third C baby gets a rhinestone star, and it just turned out to be terribly convenient that I chose star fabric and already happened to have the star rhinestones!

Try making one yourself with this tutorial!
Posted by Sam on Sunday, August 21, 2016 0 comments

After the alligator quilt, I thought it would be hard to top the cuteness of that fabric, so I was pleased and surprised to find this super cute car fabric! Once I found it, I knew immediately I would make a road design.


Since there were four car colors, I bought coordinating solid fabric for each of them, but ultimately decided on a more limited color palette. (The royal blue coordinates nicely with the bird quilt I made for big sister two years ago.) 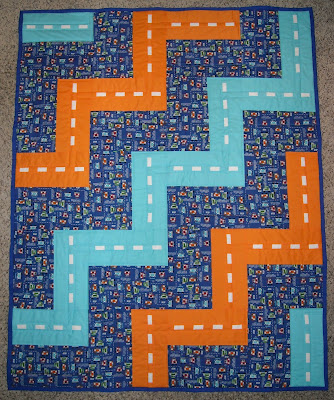