Piecing a Granny Square Quilt without Sashing or Blocks

After two scrap quilts, I still had a shoe box full of 2.5" squares of fabric, but I was left with a lot more of some fabrics and colors than others, so I needed a quilt design that worked with those imbalances. Granny squares provided the solution. In a three ring design, individual squares can be used for the center of the block, the inner ring only requires four squares, and the outer ring requires eight. I had previously made a granny square quilt that involved individual blocks and sashing. One of my scrap quilts involved a granny square design, though those also were able to be pieced as blocks due to the orientation. I knew I didn't want to using sashing or have seams between my blocks, so this quilt was going to have to be pieced in diagonal rows. 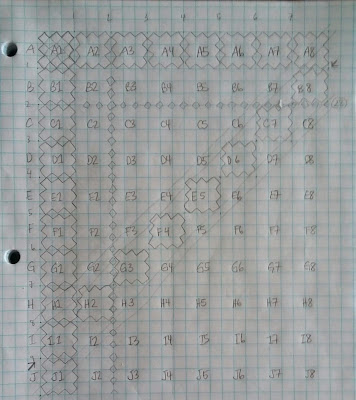 
Once I had enough piles, I laid them out to eliminate having similar fabrics too close to each other and labeled the piles with their location in the layout. I label rows with letters and columns with numbers - A1, B2, etc. - which I'll refer to as "'blocks" even though they won't be independent units.


The white squares for the interior were cut to 2.5". The white pieces that would be on the edges of the quilt were cut 2.5" x 3" to make sure I'd have enough overlap to trim the edges and accommodate the binding.

I laid out each "block" at the beginning of the row and sewed them together, using the longer white rectangles on the ends that would become the edge of the quilt (the three on the left in the photo below), and the white squares on the ends that would connect to other strips (the two on the bottom in the photo below). This created a strip of 2 squares, a strip of 4 squares, a strip of 6 squares, another strip of 4 squares, and another strip of 2 squares. Then I moved the first three strips with 2, 4, and 6 squares into a pile off to the side, keeping them in order.


I took the second strips of 4 and 2 squares and laid out the next "block" in the row, ultimately turning them into strips of 6 squares as well. This process repeats through the end of the row. Move the three strips with 6 squares on to the piles of strips, keeping them in order. Take the last two short strips to start the next block.


When you get to the last "block" in the row, add the longer white rectangles that will create the edge of the quilt (the three on the right in the photo below).

Once you have two rows of strips, you can start connecting the strips. Your first three strips will just be one "block." (As you can tell from the photo below, you'll also need to add a strip of white to create the corner of this block.) You will only be able to connect the first three strips of the second row before you also need strips from the third row, so you may want to wait until you have several rows of strips before you start joining them. In the photo below, the next strip to be added involves strips from A6, B5, C4, D3, E2, F1. Then you just keep on going. It can get heavy as you add strips, so you may want to piece in sections as the strips get longer and then join them. 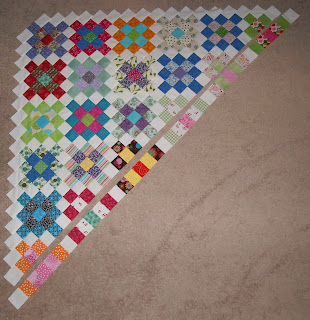