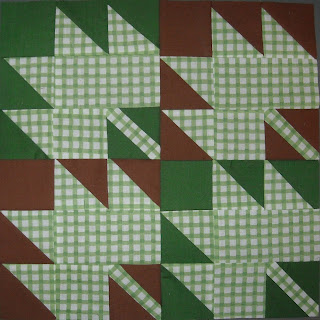 I really wanted to do a leaf block, but these fabrics were as close to leafy colors as I had. I wasn't sure how it would turn out, but I like the combination.
Posted by Sam on Thursday, April 30, 2009 0 comments

These are my monochromatic blocks. I hope I don't regret having like colors grouped together in the finished product, but they do look so nice! 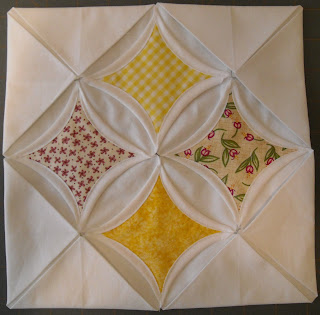 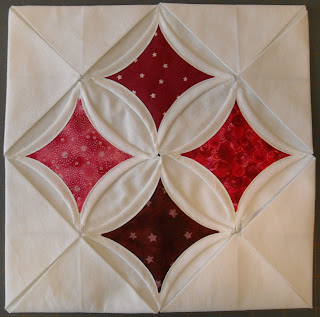 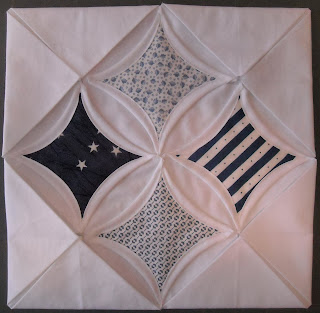 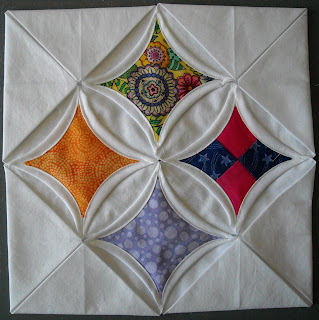 I've wanted to do a Cathedral Window quilt since approximately 2002 when I first saw the design. I played around with it a bit, even buying yards of muslin a couple years ago, but the instructions required sewing all the blocks and turning them inside out and it was just a lot of work! Then last year I found this tutorial that only requires ironing the blocks. So this year I finally mustered up the motivation to iron 6 yards of muslin, cut it into 96 squares, and then iron the squares into the folded blocks. Then they sat there for a couple months while I mustered up the motivation to sew them together. 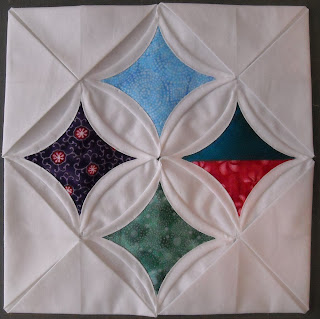 In order to make sewing the colored squares in easier, I've started with smaller blocks that will be joined later. There will be 24 9.5" blocks to join, so the finished project won't be very large. Now I'm on a roll sewing in the colored squares, even if it does require a lot of pinning, since the technique is the same as my dragonfly quilt. So far I've been able to use all scraps, but in order to achieve a more varied selection of fabric, I'm going to have to start cutting into my stash. 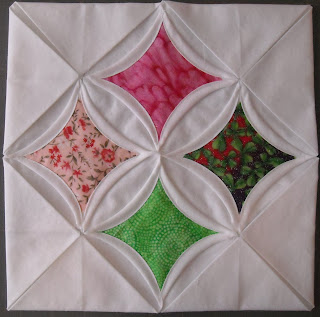 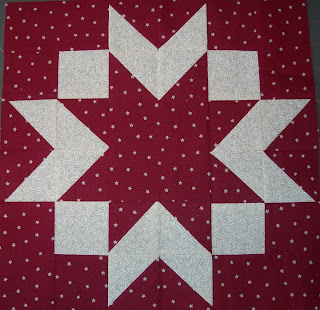 So you may have noticed a design trend among blocks #25-28. I didn't do it on purpose, I just got rather carried away with this design. This one is may favorite of the four.
Posted by Sam on Thursday, April 23, 2009 0 comments 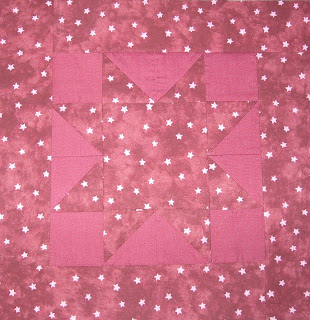 I love the star fabric in this block. I wish I had more, but it was just a fat quarter.
Posted by Sam on Tuesday, April 21, 2009 0 comments 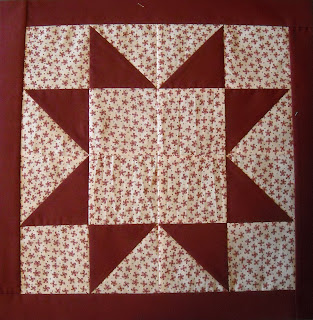 This block uses scraps leftover from my red and white quilt.
Posted by Sam on Sunday, April 19, 2009 0 comments 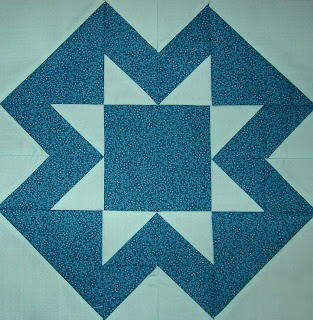 I love the way this design turned out and I love the fabric! I've had the dark one for a long time. Fortunately, I had some left over from these pot holders.
Posted by Sam on Thursday, April 16, 2009 0 comments 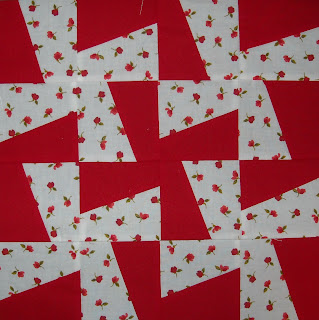 I would love to do a whole quilt with this design.
Posted by Sam on Monday, April 13, 2009 0 comments 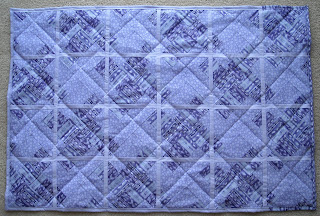 I made this quilt for my mom's cat, Lily. The intent is that my mom can put it on the couch for Lily to sit on and protect the couch from cat hair. However, Lily has taken to burrowing under the comforters on our beds for naps, so I think it's more likely that she'll snuggle under it.

Here's a close up of the fabrics: 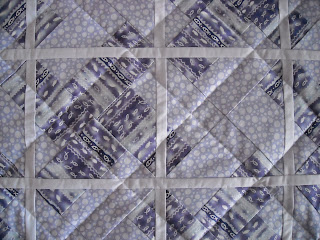 I had the fish fabric leftover from a bag I made years ago for one of my friends who liked purple. I thought the fish theme worked well for a cat quilt, and the coordinating fabric looks like bubbles. I thought about trying to quilt fish shapes into it, but I decided that attempting curvy lines probably wasn't worth it. 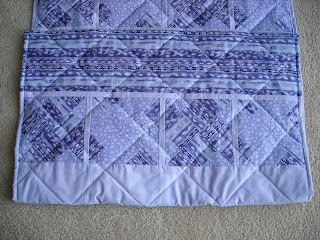 This is the first quilt where I've done something interesting on the back. I didn't do a whole lot of mathematical calculations before starting this quilt, so I ended up with some extra blocks. The quilting pattern is not particularly interesting, but I'm just glad it ended up lining up the same on the front and back blocks. 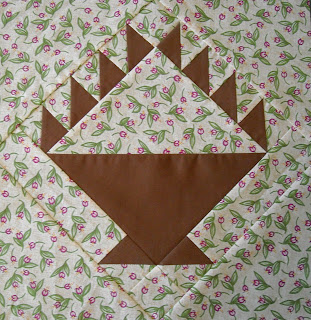 I love this block so much, I'm not sure why I never tried a basket block before! It did involve quite a bit of calculating, but I am very pleased at how it turned out!
Posted by Sam on Friday, April 10, 2009 0 comments 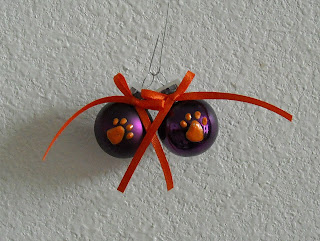 These are from my ornament making spree the first year I had a full-sized Christmas tree (purchased on sale after Christmas 2006 with white, pre-strung lights and detachable pine cones! EVERYONE heard about the detachable pine cones!) I had several of these purple ornaments leftover from making ornaments for my STAR friends years ago. I had enough left for 4 sets, one of which stays on my year-round ornament display. It worked out well that Clemson's colors are purple and orange! I say I made these for Zack, but really, he doesn't care, they're for me. Aren't they adorable? Tiger paws make for a cute logo.
Posted by Sam on Wednesday, April 08, 2009 0 comments 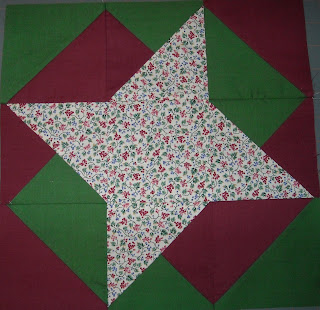 You can see from other quilts I've made that I really like this design. The floral fabric is leftover from a quilt where it was originally paired with purple.
Posted by Sam on Tuesday, April 07, 2009 0 comments 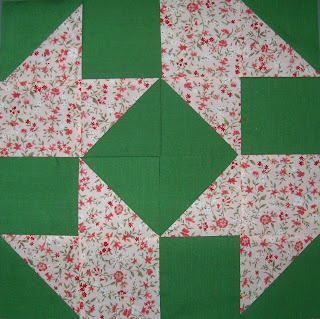 This isn't the most interesting block, but I think it works well due to the combination of the floral fabric and the fact that the design looks like a flower. I really like the fabrics, so much that I used them for a spring ornament.
Posted by Sam on Sunday, April 05, 2009 0 comments 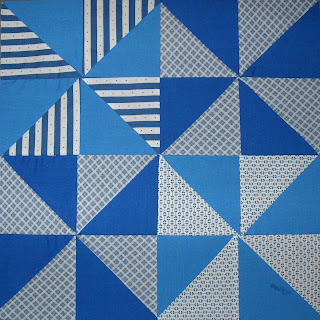 These fabrics are all leftover from various non-quilt projects I did circa my high school years. The two paired with light blue solid were from a pillow. I want to say that the one paired with the dark blue solid was a doll dress, but that's my best guess. They did all make it into my scrap quilt.
Posted by Sam on Friday, April 03, 2009 0 comments 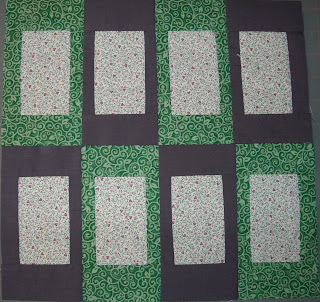 This block uses scraps of two of my favorite fabrics. The floral fabric is from the first mini-quilt I made on my own; it was also used for a basket. The green is leftover from the quilt I made with Ann. The purple is just plain, but it is leftover from my first real quilt.
Posted by Sam on Wednesday, April 01, 2009 0 comments