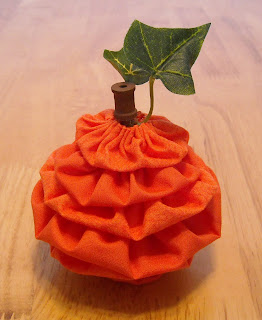 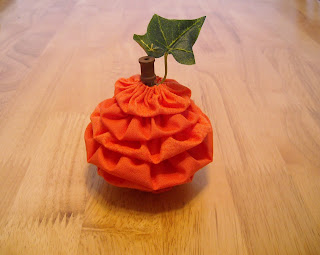 One of my co-workers had these adorable yo-yo pumpkins on her desk so I just had to make one! It's about 3" tall. They are super easy to make.

Try making one yourself using this tutorial. 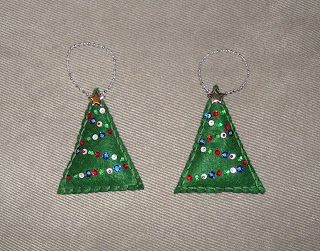 These little trees are about 3" tall. They are decorated with sequins and seed beads and stuffed with a little quilt batting. The edges are finished with a slightly off-kilter blanket stitch. I realized it was wrong after the first one, but I decided it looked better that way.
Posted by Sam on Wednesday, September 23, 2009 1 comments

It feels like I've been working on this quilt forever. I think that's due in part to the fact that it took me forever to decide how I was going to quilt it; or rather, I knew it needed a lot more quilting than other quilts if I wanted it to look decent, so I kept putting it off, hoping to come up with an alternate idea. I quilted the pink sashing twice, a quarter inch from each edge, using pink thread. Then I quilted all the stars twice, a quarter inch inside and outside of each, using orange thread. It did produce a lovely effect, and it wasn't that much work, once I got started. 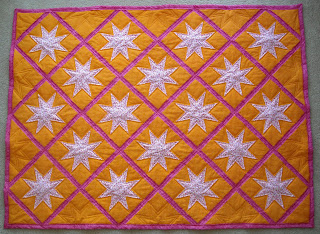 For the half squares, I drew out half the star design and pinned the paper to the quilt as a guide. The squares on the back didn't quite line up the squares on the front, but fortunately both thread colors look nice on either fabric. 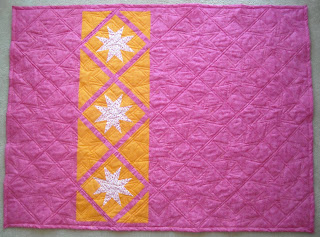 It's going to New Zealand, to one of my sister's friends who's having a little girl in January. It's a bit big for a baby quilt, but I didn't know where it would end up when I started it.

I've added my starry scrap quilt to the collection on the wall. It was time to get it off the chair, so I super glued two clothes pins to a dowel, painted it silver, tied on some fishing line, and voila! - a quilt hanger!

Here's a close-up of the very high-tech contraption: 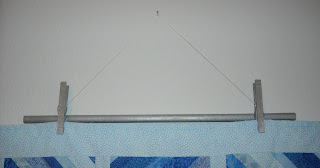 It's only been hanging since yesterday, so I hope it continues to hold!
Posted by Sam on Wednesday, September 16, 2009 0 comments 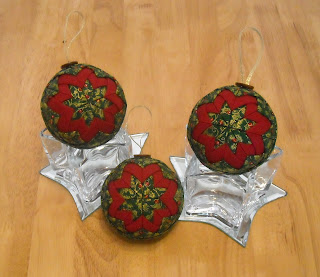 My mom requested 5 of these ornaments as gifts for her friends this year, so I thought I'd better get started early. Since the styrofoam balls come in packages of 6, she gets one for herself too!

Try making one yourself with this tutorial. 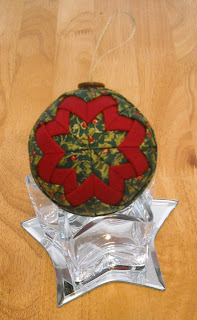 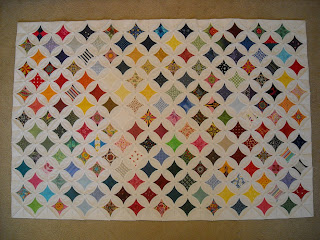 All 172 inside squares are complete! Only 40 squares for the border to go. It is not quite a charm quilt, but the squares are very unique nonetheless. For the ones where I cut multiple squares from the same fabric, I used fabrics with different designs.

For instance, these two are from the same fabric: 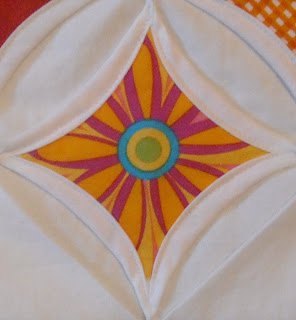 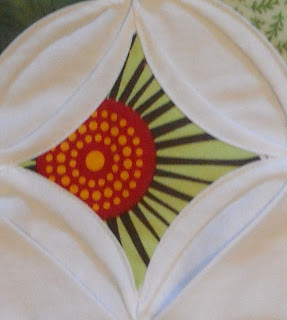 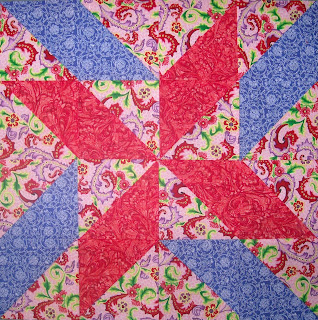 This block was yet another reason why a digital camera is a very helpful quilting tool. I wasn't sure if I preferred red or purple in the center, and while this was the original design idea, I also experimented with a different design. I love the combination of these fabrics so much, I'm tempted to create a whole new project around them, but the red and pink fabrics are just fat quarters, so there's not much left to work with.
Posted by Sam on Saturday, September 05, 2009 0 comments 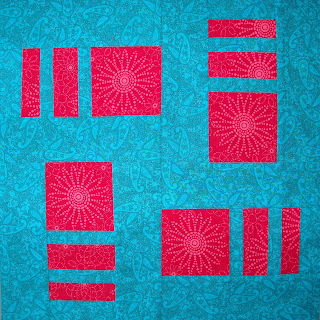 I'm not usually a huge fan of fussy cutting because it can be such a waste of fabric, but this block wouldn't have quite the same effect with the red star burst squares. This was the original design I came up with, but I played around with several alternatives before finally settling on it. I love the contrast of these colors! They were both fat quarters originally purchased for my Cathedral Window quilt, so I wish I had more.
Posted by Sam on Tuesday, September 01, 2009 0 comments