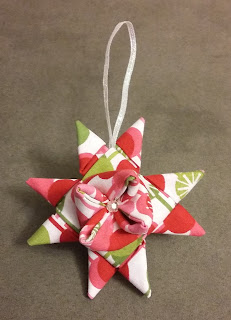 Christmas ornament season has officially begun! I've already made several ornaments this year, but I hadn't given much thought to the ornament exchange with Amanda until September, which is unusually late for me! (The earliest I've started is February). This ornament is for me though. In 2013, I made two versions of this ornament - a snowflake one for Amanda and a holly one for mom - but I didn't have enough of either fabric to make one for myself. Fortunately I had some scraps from Melissa's tree skirt that were long enough (I really love this fabric), and I'd conveniently linked to the tutorial in my original post. Where as the snowflake was flat and the holly ornament just had points on one side, this one has points on both sides.
Posted by Sam on Sunday, September 25, 2016 0 comments