I decided to work on my Quilt Block Project by pulling out my two favorite blocks and making them their own quilts. So the purple and yellow pinwheel block is getting its own quilt, as is the pink and blue block. This is the block I made to coordinate: 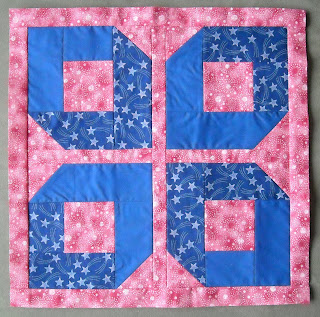 The blue stars and pink dots are some of my favorite fabrics, and I think I love the new block even more than the original! I was tempted to make another block just like this one, but I'm running out of solid blue fabric, and - due to my extensive collection of pink fabrics - I think can finish this quilt without buying any new fabric!

I didn't quilt much last year, and I decided that I would change that in 2013. I started by pulling out the blocks from my Quilt Block Project. However, when I laid it out, I still wasn't entirely happy with the combination of blocks. I decided to pull out my two favorites, the purple and yellow pinwheel block (shown below) and the pink and blue block and make them their own quilts. It turned out that I had enough scraps to make a second purple and yellow pinwheel block, only slightly smaller. 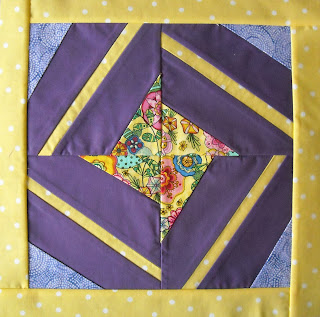 I had three other purple and yellow blocks to work with:

After some seam ripping and some additional fabric, they turned into this: 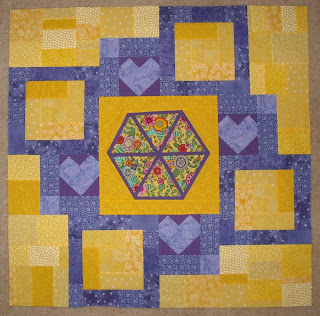 This was going to be the back of the quilt, and the pinwheel blocks would go on the front. At one point, I had purchased at least a yard each of four yellow fabrics for another project, so I was determined not to buy any more fabric except some solid purple for the binding. But the back didn't fit with the design I'd put together for the quilt top. Then one day I realized that if I took apart that center hexagon block, I could make more pinwheel blocks. After more seam ripping, I realized I didn't have enough of the yellow or purple polka dot fabrics to make the same pinwheel blocks. However, I was still able to recycle the pieces into something more useful: 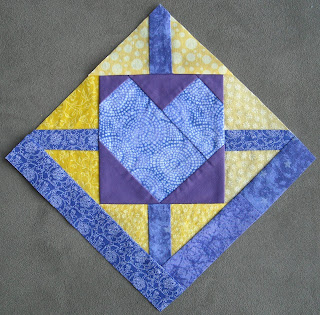 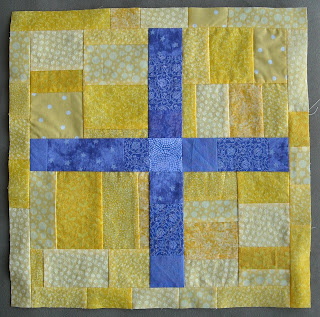 A few more blocks, and I'll be able to piece what will either become the new back or a second top.