Julie wanted some elephants to match her elephant mobile, so I pulled out the elephant pattern I used for the pink and orange elephants. I scaled the larger pattern down a bit, so they are about 8.5" x 6.5". They are not stuffed, but instead have a layer of quilt batting in them. 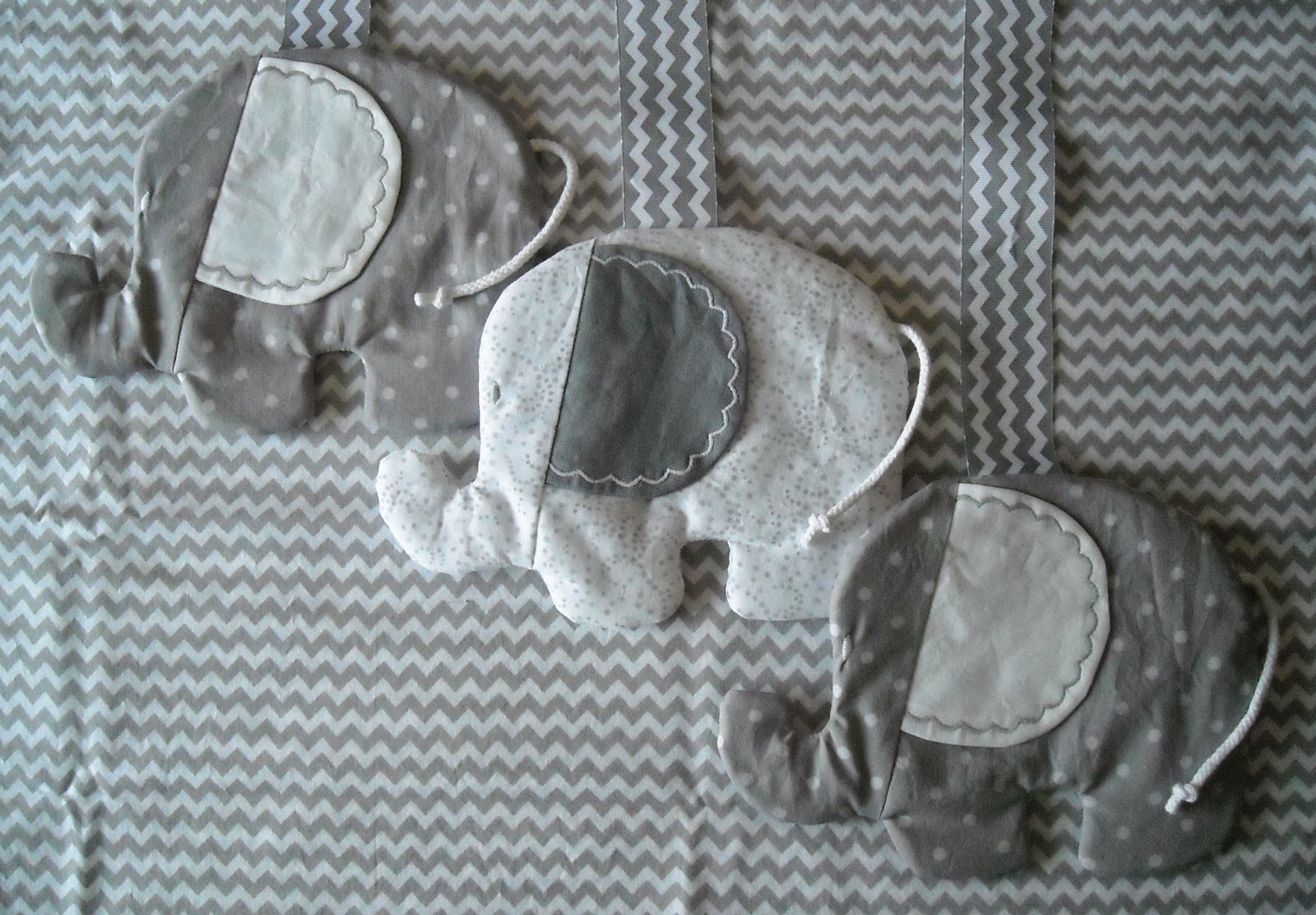 They hang on about 2' of ribbon. I added button holes to the end of the ribbon for flexibility of hanging, but also just to practice using the button hole foot on my new machine.

ETA: Glad I added the button hole for hanging, as Julie has repurposed one of the elephants for hair bow storage: 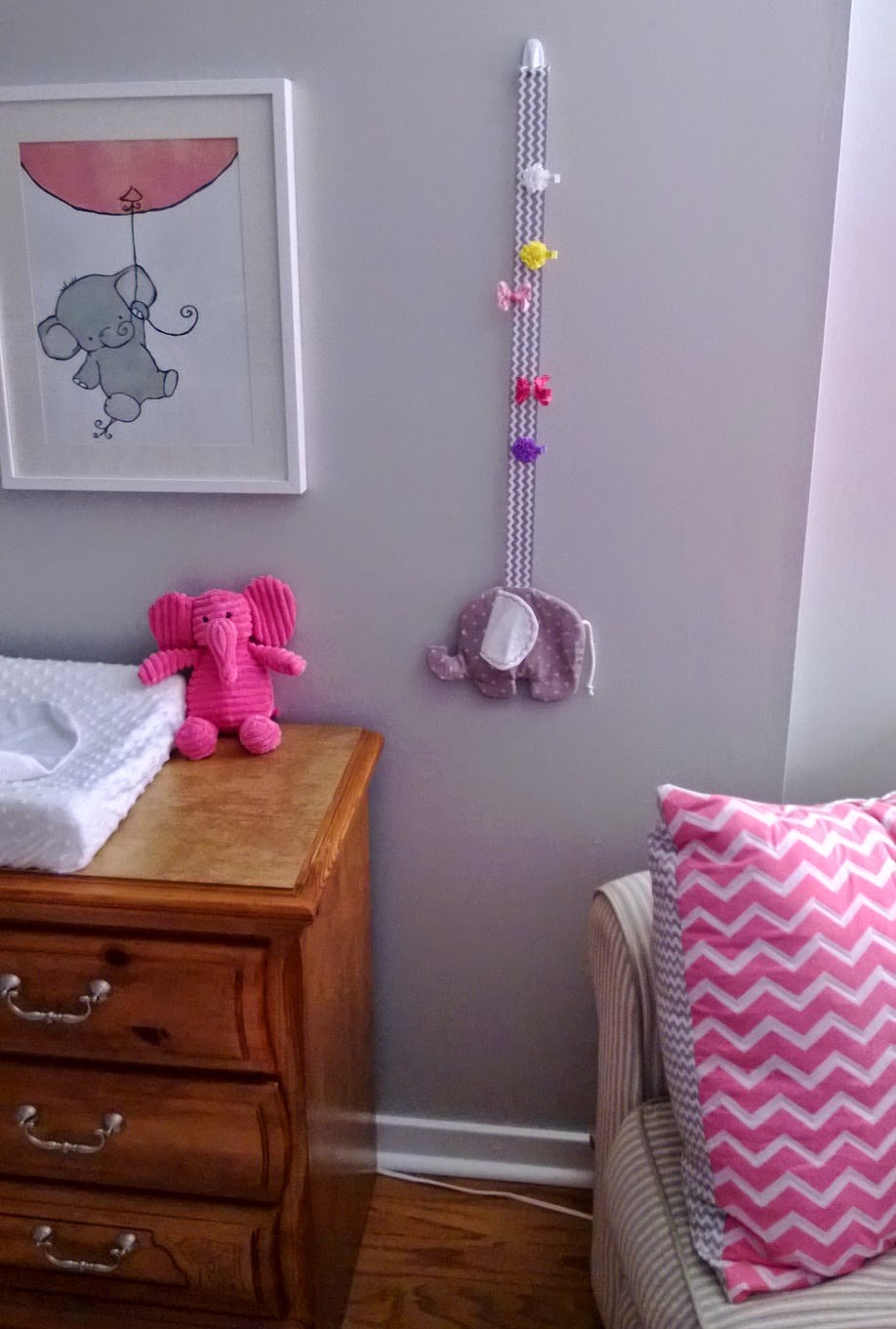 You can also see the pink chevron pillow I made with fabric leftover from the airplane quilt.
Posted by Sam on Sunday, April 27, 2014 0 comments

Now that I have a little more space on my new sewing table, I decided to make a jar pin cushion. It really makes sense for the storage aspect, because I keep a ton of pins in my flower pot pin cushion. However, it's never enough when I'm pinning a quilt, and on a daily basis it's rather full. 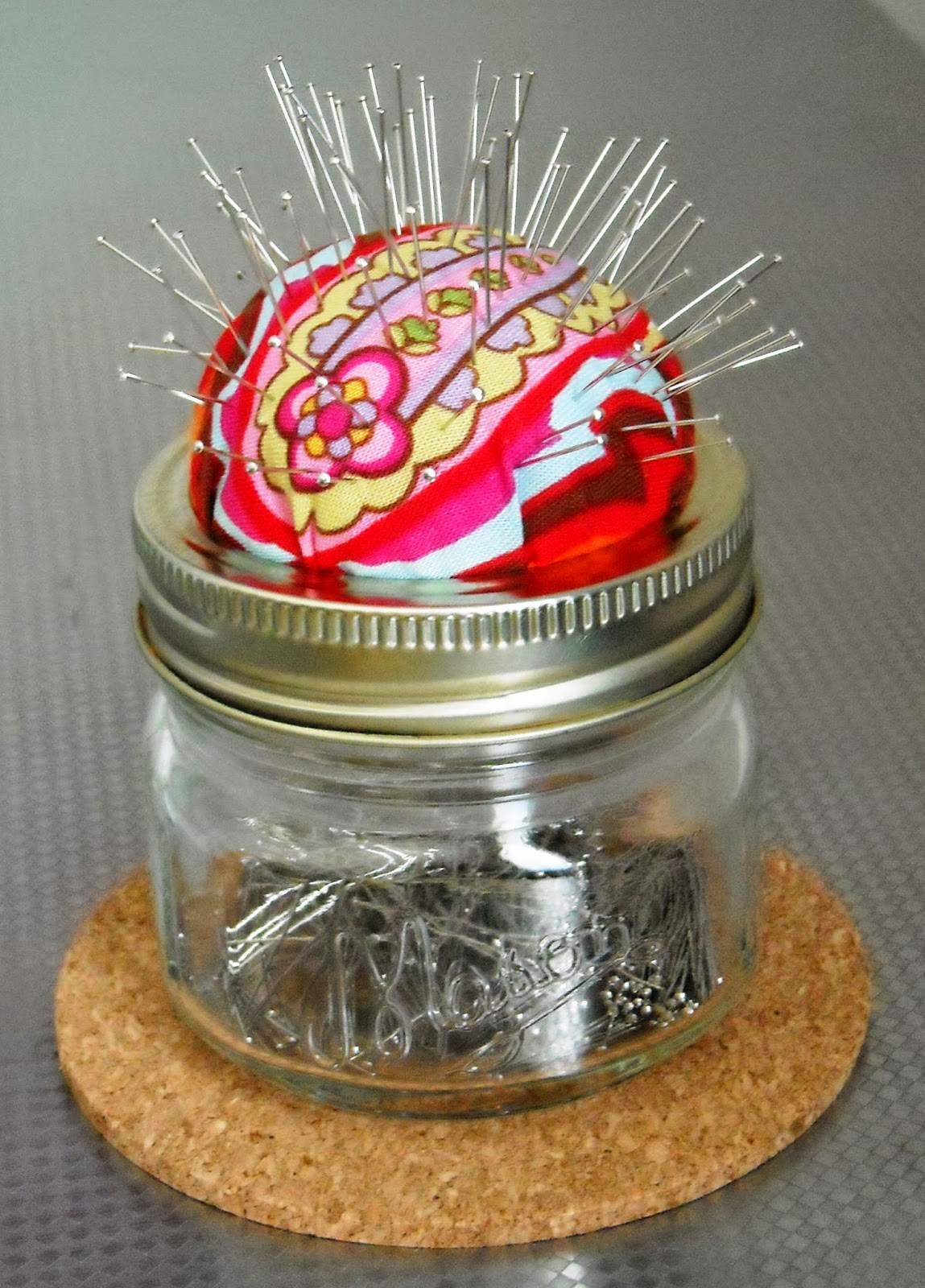 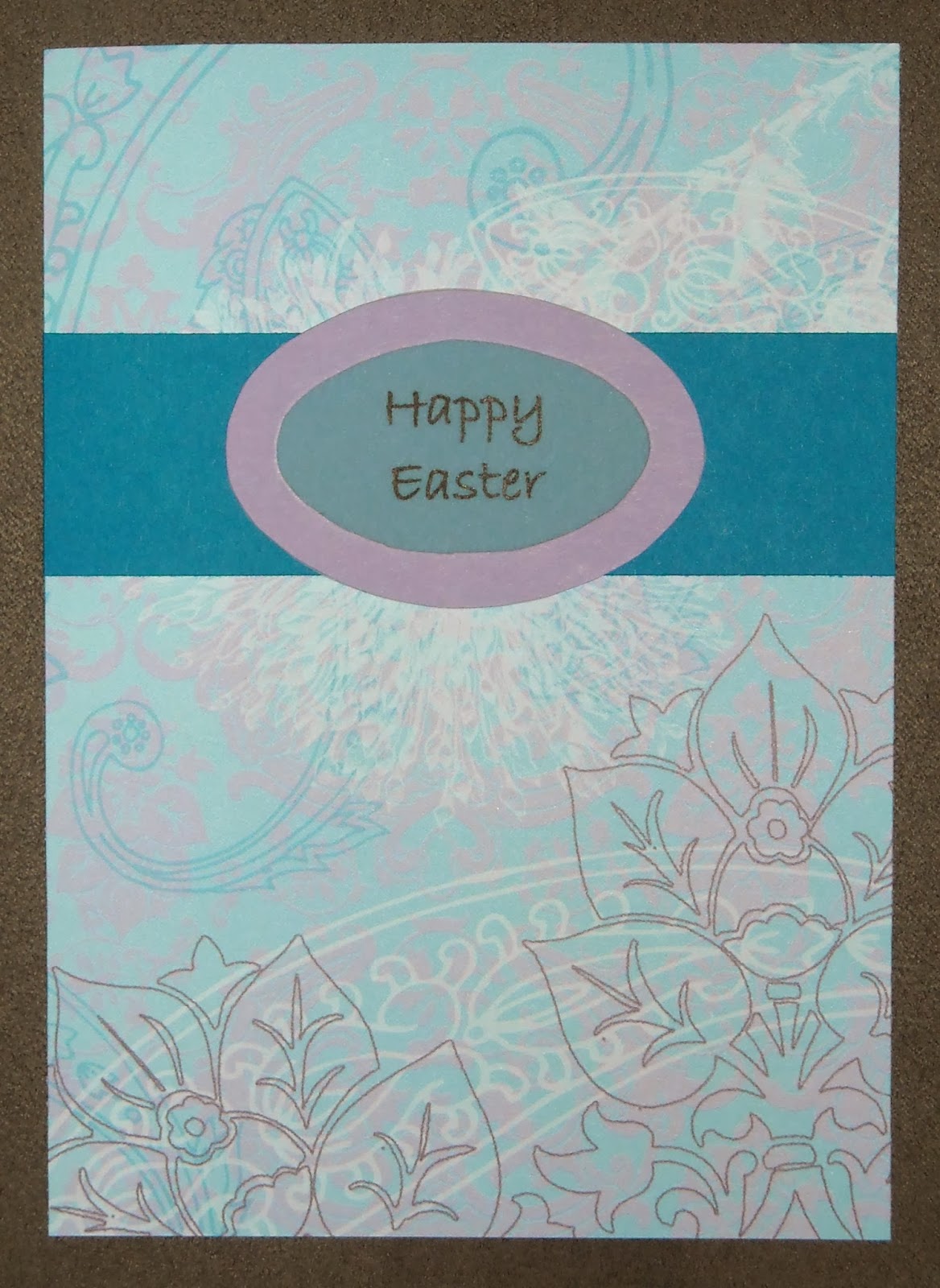 I had purchased this paper for a scrapbook layout and then changed my mind and never used it. It seemed appropriately springy for Easter cards though. Happy Easter!
Posted by Sam on Sunday, April 20, 2014 0 comments 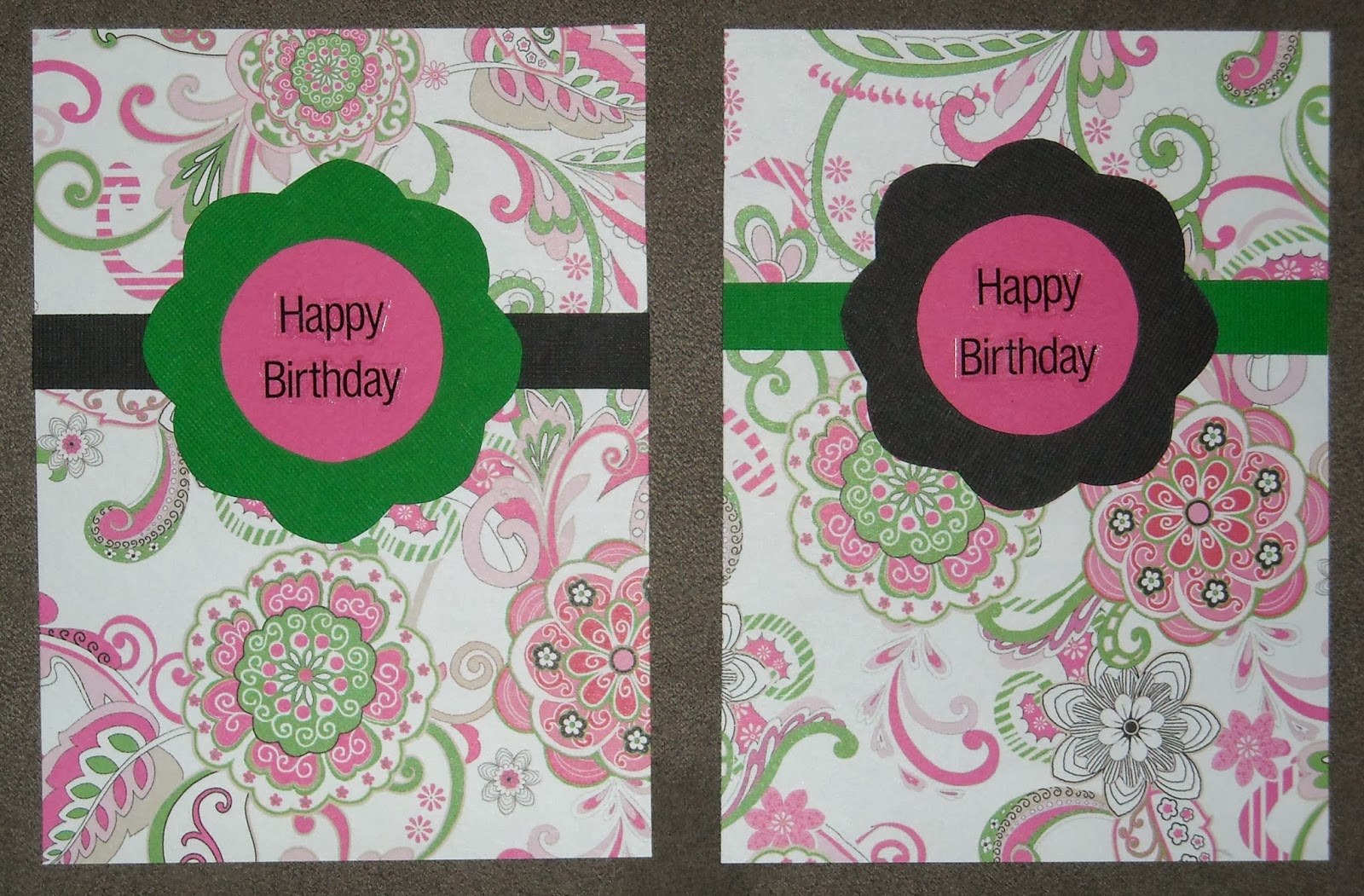 I think I purchased this paper simply because it is the same pattern as the fabric I used in my Cathedral Window ornament. I decided to put it to use for spring birthday cards.
Posted by Sam on Saturday, April 19, 2014 0 comments

I decided I needed a thread catcher for my new sewing table. I like the thread cutter on my new machine, but it results in longer threads to snip off my projects. 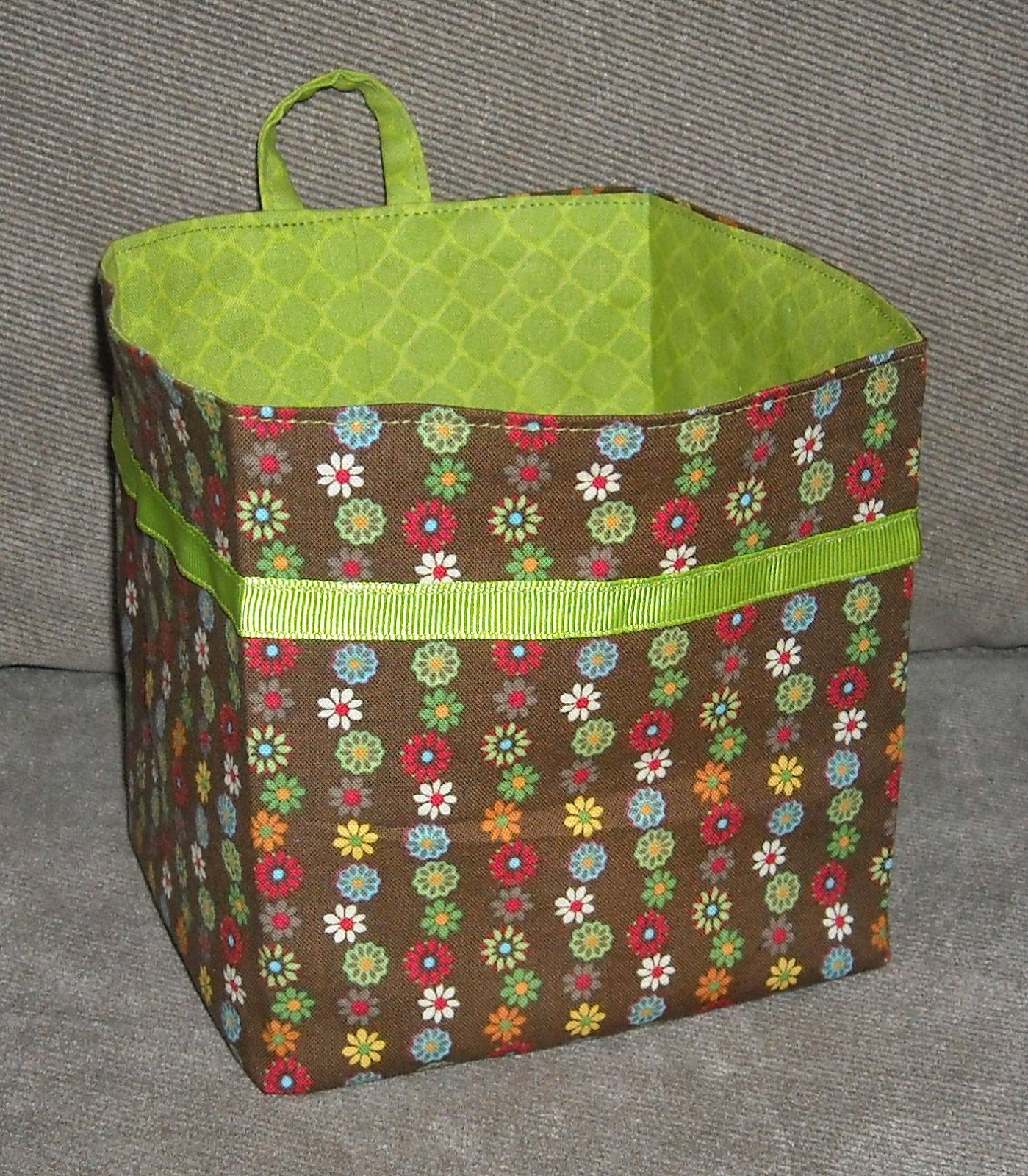 I am taking advantage of my new metal table by attaching items with magnets: 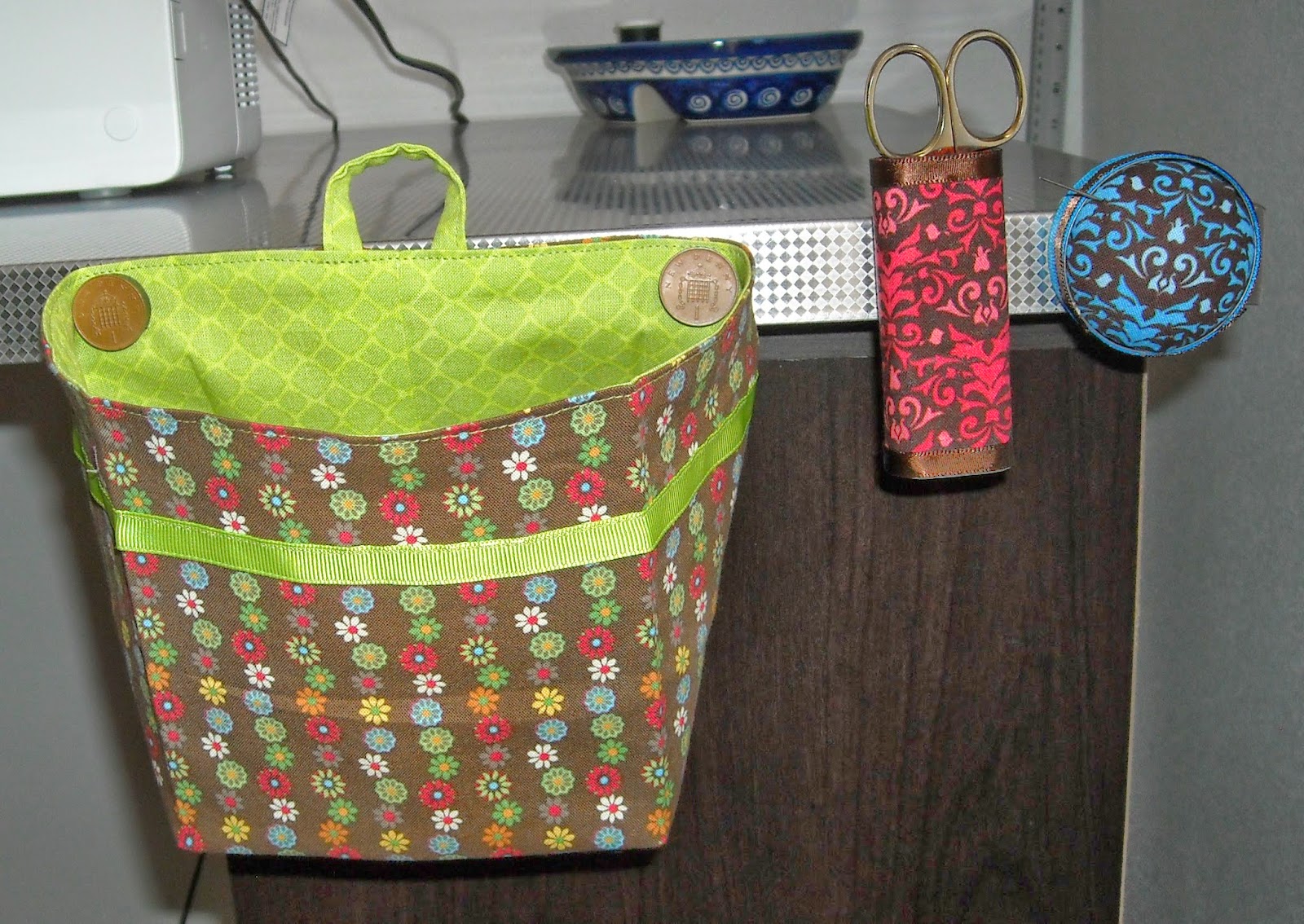 The thread catcher is the perfect complement to my new thread holder: 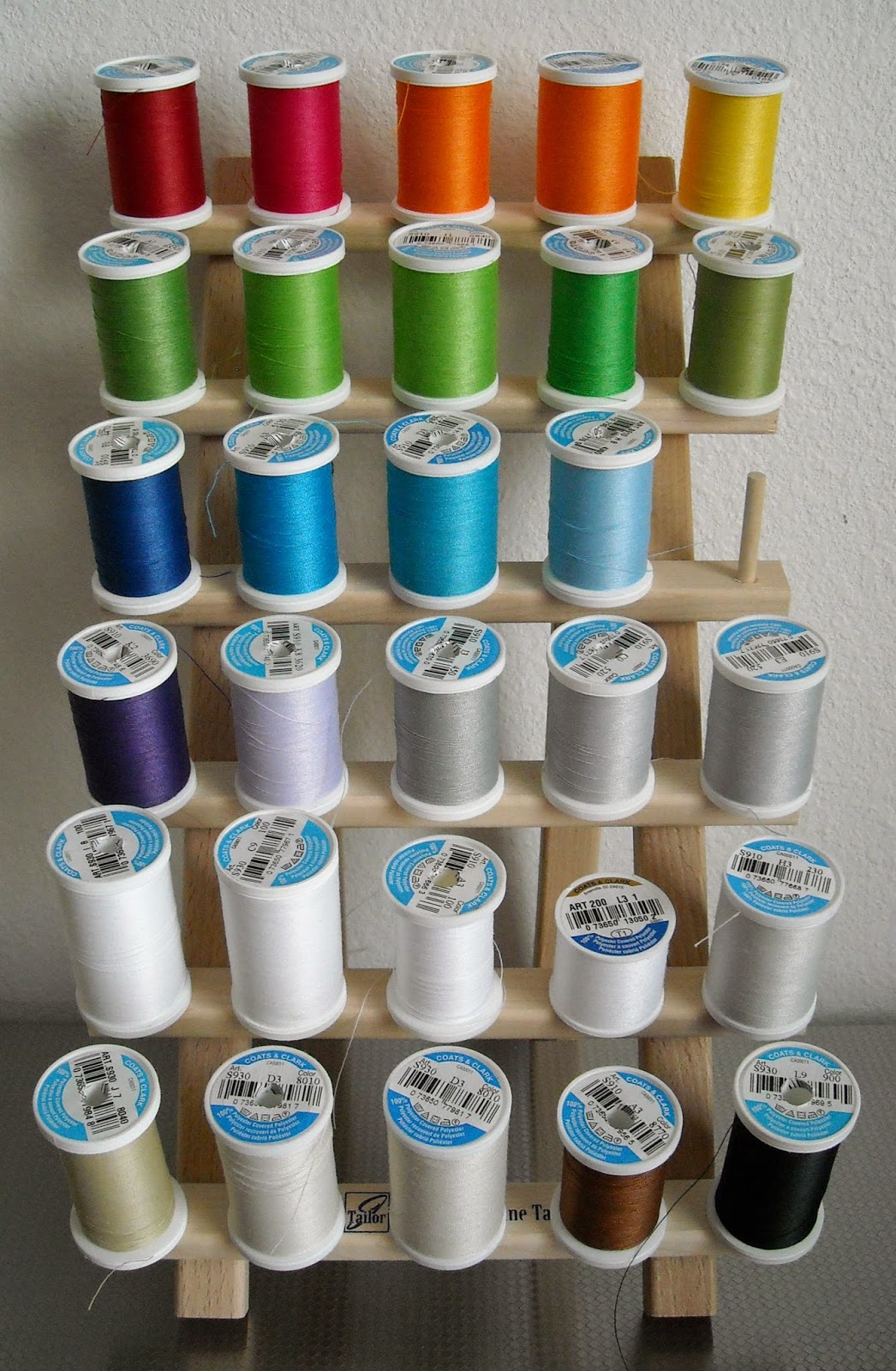 I've also accessorized the table with these little spice containers: 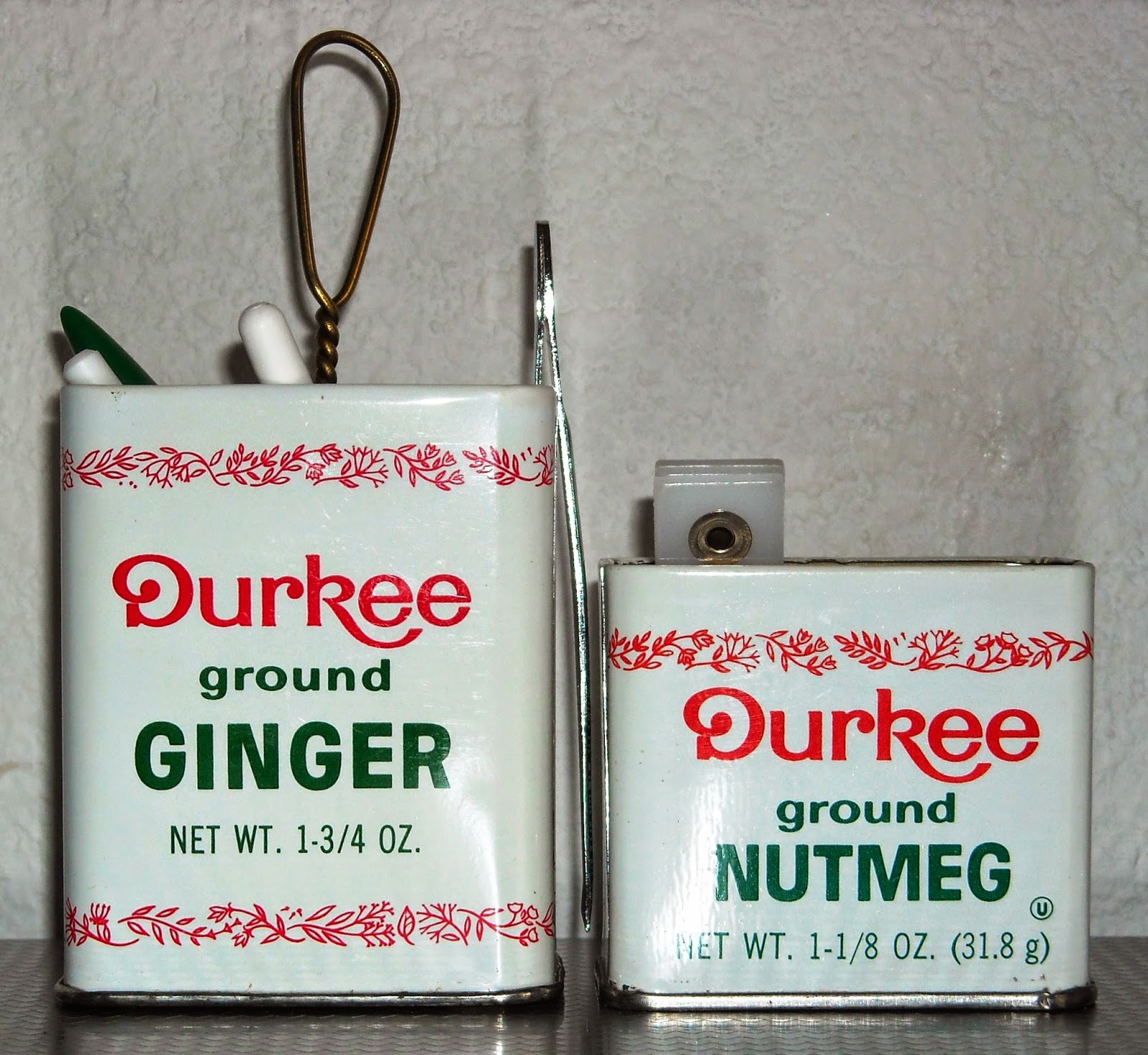 I have never been much of a clothes sewer, mostly because I don't do very well with patterns. However, after reading Overdressed by Elizabeth Cline, I decided I would look into classes. Unfortunately, none of the sewing shops around here offer classes on clothes. Then I discovered that the local community college was offering a short continuing education class called "Simple Sewing for Spring" that would focus on clothes, although it required no sewing experience. A couple people in the class had sewn before, but half had never even used a machine, and I was only one with recent, active experience.

The first project was a headband, just to see our skill levels. It did end up fitting my head, not that I will wear it.

The second project was a bag. 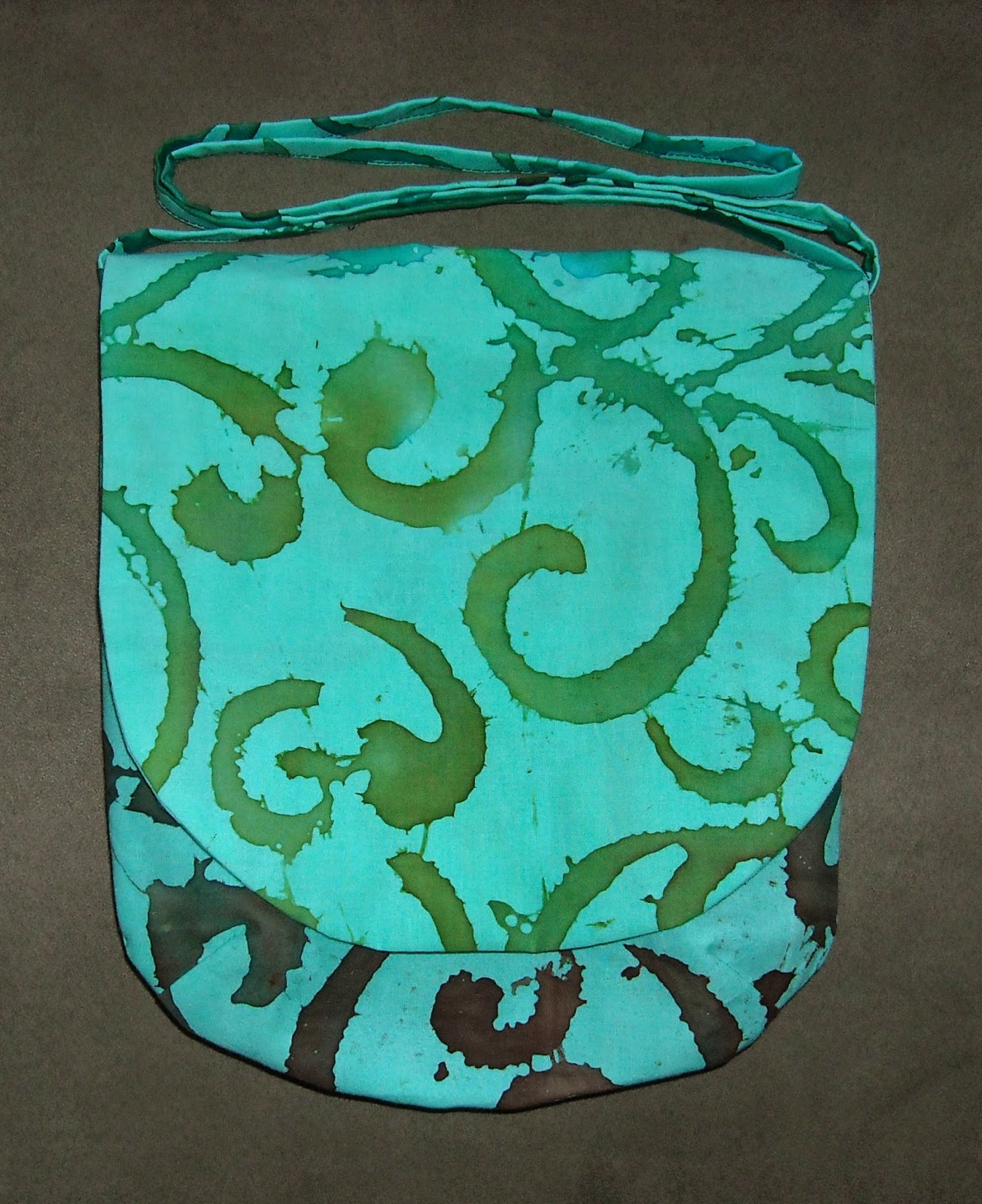 The third project was actual clothing, though out of muslin as a test run. We all made the same pattern, which the instructor cut out for us based on our bust measurements. It did end up fitting for the most part, but that was only because I decided to experiment with french seams, so I ended up taking it in unintentionally. Otherwise, it would have been too big. The neckline was of course too low. I ended up doing three different finishes on it. Only the arms came out decently, and I'm convinced it's because a pretended it was a quilt and bound it as such. 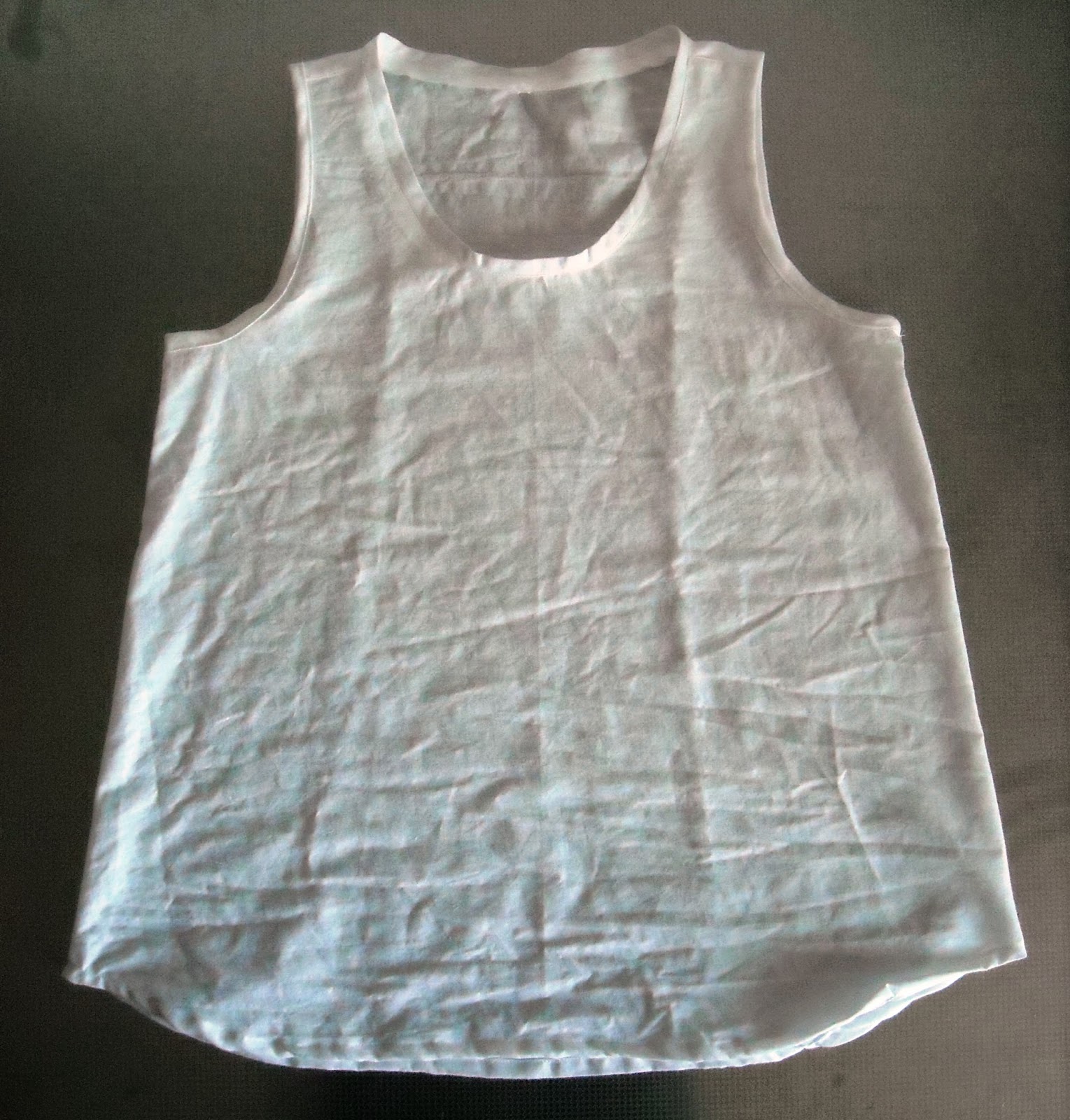 We met at the fabric shop as a class and I bought some marked down voile for an actual tank top, but after my muslin trial, I have no plans to start a real top in the near future. 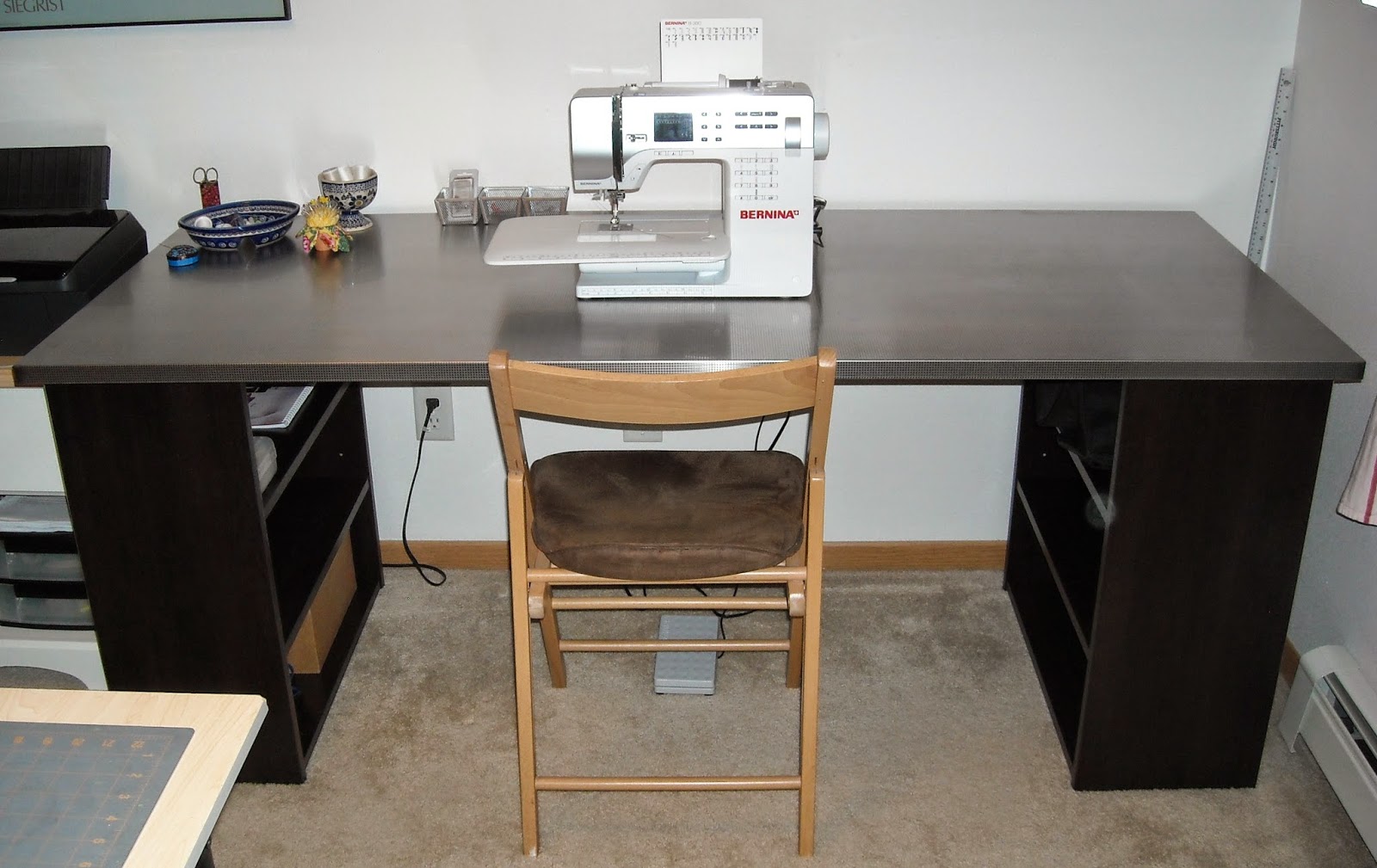 Getting a new machine created a problem in the sewing room - where to put it? My old machine was in its own table, which was awesome. The new machine did not have that luxury, and of course it did not fit in the old table. We ended up using the top from Zack's new toolbox, which he upgraded. It's big - six feet long and two and a half feet deep. It's also heavy, so we had to figure out what we were going to use to support it. I didn't want to spend a fortune on this project, so we got two small bookcases that provide some extra storage as well. It required a bit of rearranging, but it's much nicer to finally have it set up.
Posted by Sam on Saturday, April 05, 2014 0 comments