This year Amanda sent me two adorable embroidered felt trees! She loves hand-sewing a lot more than I do! She is also a whiz at French knots, which always give me trouble. 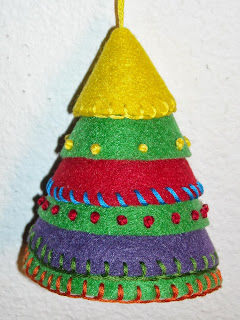 The second tree she designed to look like a candy corn, since we eat a lot of them. 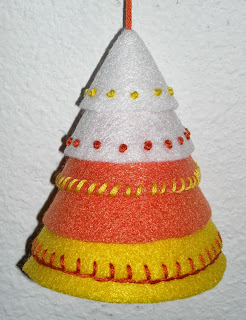 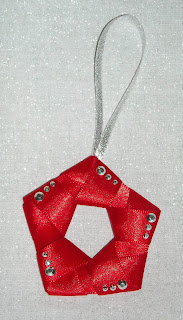 Amanda likes ribbon, so I like to make ribbon ornaments for her. I saw this ornament on Martha Stewart and decided to make one, but, with plain red ribbon, it was definitely lacking something. Fortunately I had picked up these self-adhesive silver rhinestones at Michael's and they were the perfect touch. I hope they stay attached, because the smallest ones are much too small to glue in place. The ribbon is 5/8" wide and the ornament is about 2.75" at its widest.
Posted by Sam on Saturday, December 28, 2013 0 comments 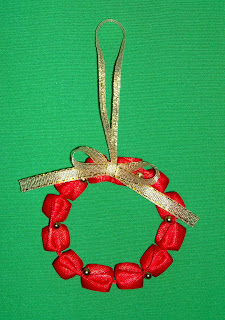 I saw this design on Betz White's blog. She had two versions: ribbon and felt. Definitely check out hers - the photos are much better and you can buy a pattern! I wanted to make a felt version, but I didn't have a piece of felt long enough, so ribbon it was! Using 5/8" wide ribbon, it's about 3.5" in diameter. I think it's a little wreathier than my previous ribbon wreath.
Posted by Sam on Friday, December 27, 2013 0 comments 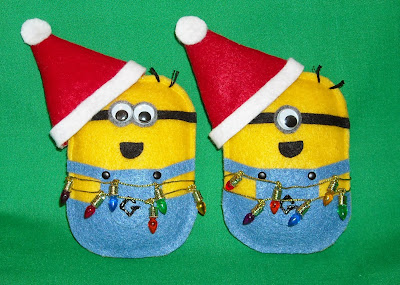 Amanda has developed a bit of an obsession with the movie Despicable Me, so I'm surprised it took me as long as it did to come up with the idea of making a Despicable Me-themed ornament. Minions are adorable, and I'm really pleased with the way these turned out, though I'm partial to the one with two eyes. Despite not having any arms or legs, I think they are easily identifiable as minions, though their heads could probably be a bit rounder and less rectangular. I particularly like the hair. The yellow felt is machine stitched together with quilt batting inside. Everything else is hot glued on, because I wasn't feeling like hand stitching. The minions are supposed to be tangled up in the Christmas lights, because that seemed like a miniony thing to do. Merry Christmas!

Amanda had a little red suitcase. She brought it when she came to visit me. It was the old-school kind with hard sides. She loved it. Earlier this spring, I had to teach a class for work about hosting craft programs in the library, which required a lot of internet research for upcycled crafts because most libraries don't have a lot of money to work with for staff and books, let alone programming. When I came across the idea of converting Altoid tins into suitcases, I knew I had to make one for Amanda. Not only would it be the perfect ornament, it would also give me a reason to use the colored duct tape sheets I'd seen at Hobby Lobby. I also happened to have a mini Altoid tin in my purse. The execution was remarkable; it turned out exactly how I anticipated it would in my mind, which doesn't always happen. I printed tiny destination images of places Amanda has been on sticker paper, including both our states. 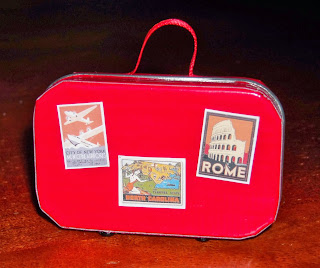 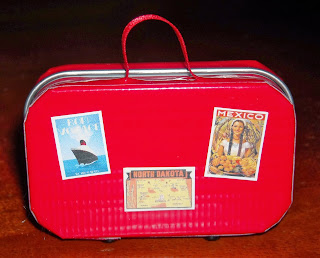 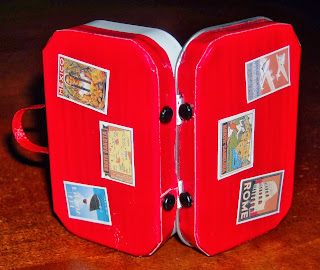 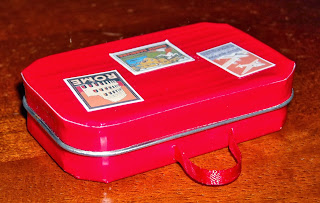 Of course, once I came up with this idea, I executed it right away, even though it was only February. Fast forward to August, when Amanda tells me she's given away her red suitcase to a friend. My first thought was, "But what about my ornament!?" However, it then occurred to me that it would still be a nice memento, perhaps even more so now that it will serve as reminder. 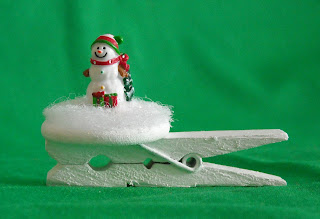 Is this not the cutest tiny snowman you've ever seen? He's only half an inch tall. My mom likes to send personalized ornaments for Christmas. One year she sent tiny snow globe ornaments with these snowmen inside. Mine, however, did not survive the mail. So now we just have a "ZACK" snow globe, but I saved the little snowman from my broken ornament to recycle.

The problem: how to turn it into a new ornament? You couldn't just hang it. Finally it occurred to me to make a clip. I have a couple of Snoopy ornaments that clip, so I don't know why I didn't think of it sooner! I put a ring of quilt batting around him to look like snow, and I added glitter glue for some sparkle.
Posted by Sam on Sunday, December 15, 2013 0 comments

I didn't plan to make Christmas cards this year, but I needed a few extras, and pretty soon I was on a roll: 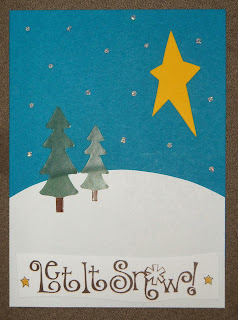 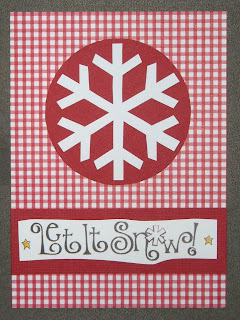 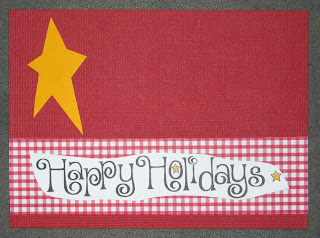 An updated version of a similar card from 2004.

These ready-made cards needed a bit of sprucing up before sending,
so I added a snowflake. 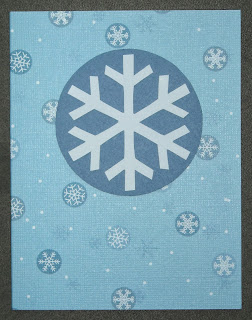 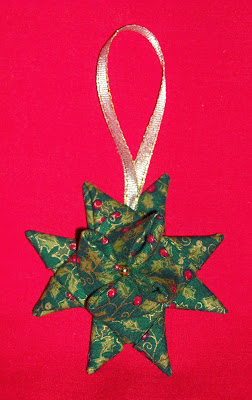 After making my snowflake star ornament, I realized that with a little alteration, I could make an ornament that was flat on the back and had the three dimensional points on the front. Even with the stand up points, I still added a gold bead to give the center a more attractive focal point. It also definitely looks better hanging from this orientation.

I pulled out some leftover holly fabric. Instead of starting with 14" strips, I started with 15" strips, just so I wouldn't end up short. Then, instead of folding the strips in half equally, I made the bottom of the fold about an inch shorter than the top:

After creating the three dimensional points, I ended up needing to trim a bit before I tucked, so 14" might have been sufficient, but better safe than sorry: 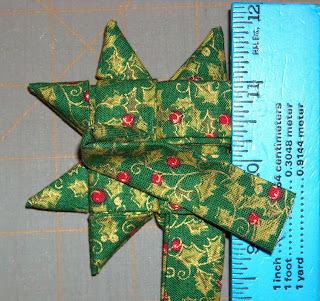 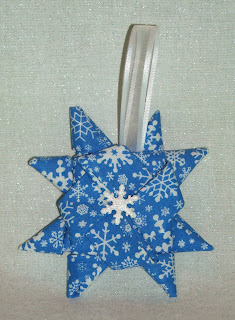 I came across a lovely ribbon ornament on the Martha Stewart website. However, with no pictures, it's an absolutely horrid tutorial, especially for a visual person. Fortunately, a quick web search turned up a much better tutorial with extremely clear photo illustrations. It is really easy to follow. This ornament is known by many names: German star, Froebel star, Moravian star.

Unfortunately, my attempt at making a ribbon version did not turn out. After more searching, I also found a tutorial for making a flat fabric star. This is my altered version of it. When I followed the instructions, I ended up with just enough fabric to tuck in on one side of the ornament, and enough on the other side that I would have had to trim some off in order to tuck it in. Unfortunately, it wasn't enough to make the stand up points of a three dimensional version. I wanted to use holiday fabric (leftover from my Cathedral window snowmen), but since I used only one fabric instead of four, I didn't think the flat version had enough visual appeal, so I compromised and made the extra fabric into pinwheel-style points instead of trimming and tucking. I added a snowflake to create a central focal point.
It's about 3.5" from point to point.
Posted by Sam on Saturday, December 07, 2013 0 comments 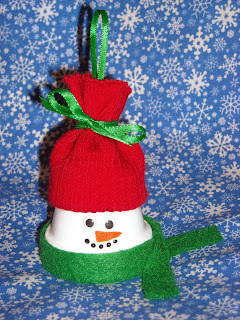 It's a googly-eyed snowman themed Christmas! This snowman is made out of a tiny ceramic flower pot. I'm guessing it was leftover from my flower pot pin cushion project. Since I made those 5 years ago, I was determined to turn this last pot into an ornament. The snowman's hat is made out of tiny mitten with the top chopped off. The scarf is felt. It's about 4" high to the top of the hat.
Posted by Sam on Sunday, December 01, 2013 0 comments