My third baby boy quilt! I have been wanting to use this quilt design for awhile, but I'd had difficulty finding fabric to make it work. I was thrilled to find this cute shark print. Black seems a bit unconventional for a baby quilt, but I really like the color combination. 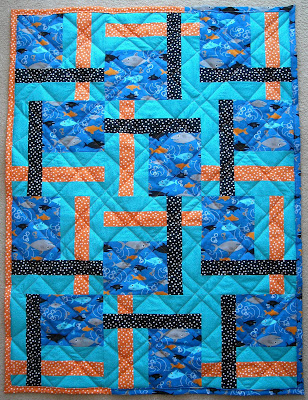 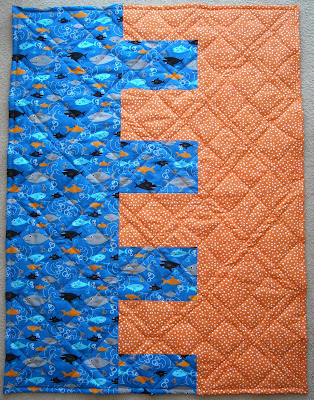 Since early this year, I've been on a cleaning binge. Of course, I'm not sure you can call it a binge if it's most of the time. I really like to clean, de-clutter, and organize. In a two bedroom apartment, I tend to quickly run out of places to organize; however, one area that tends to get avoided is the craft area, because I am such a hoarder when it comes to things that might one day be useful for a project. I've recently been trying to remedy that, and I have been evaluating and reorganizing how I store supplies and tossing useless bits and pieces that I've kept out of habit.

Between the sewing machine, ironing board, and craft desk, my crafting space takes up about 3/4 of the second bedroom, with the other quarter being the computer desk. When I'm working on multiple projects at one time, I tend to run out of room to put them and still have space to work. I tried to remedy that by hanging these little wall baskets for corralling small projects in progress: 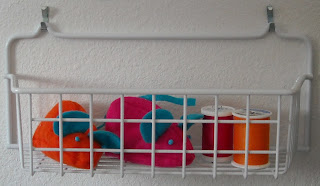 (The mice have since been completed.) 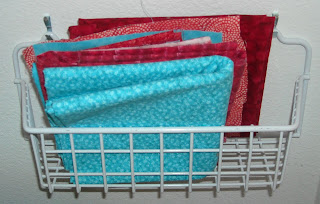 (These fabrics have been sitting out for a year now, so I'm not sure they qualify
as a project anymore and probably should just be put back in the stash.)

I also made some paper baskets to corral little pieces: 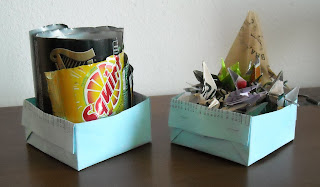 (The cranes have since been added to the crane mobile.)

One area I struggle with is getting rid of items I've made. Frequently I can't put my finger on why I don't want to part with a meaningless item. In some cases, just having made it seems to gives it sentimental value it wouldn't otherwise have. I don't want to want it, but yet I'm not ready to let it go. That, however, is not always the case. Some projects get tossed easily and, if it's worth the effort, I often have no problem taking apart projects for parts. For the rest, I've resigned myself to waiting until I'm ready to part with them.
Posted by Sam on Saturday, March 26, 2011 0 comments

I don't usually count baking among my crafty endeavors, but these cupcakes were just too pretty not to post!

It's not uncommon for craft bloggers to post about food though. Inspired by this post about a rainbow and unicorn birthday party, these cupcakes were an experiment to see whether I could achieve the vibrant colors of the cake. (My birthday's coming up and I already have unicorn fabric!) The cupcakes are pretty, but not nearly as bright as the cake. I ultimately decided it was not worth the effort to try again since neither Zack nor I are big fans of cake.

Since I was on a roll, I also made cupcakes that look like they are topped with spaghetti and meatballs because they were just too cute! No pictures of those because I had to pack them to take to work. I used Milk Duds for the meatballs. Everyone thought they were cherries, but I thought they made good meatballs.
Posted by Sam on Sunday, March 20, 2011 2 comments

I needed a new bag for taking my lunch to work. While cleaning out the closet after reorganizing my fabric, I found this lobster bag, given to me by my high school German teachers. It needed a bit of refurbishing to serve as an appropriate work bag. It was too flat, and the handles were too skinny. I lined it with canvas to make it sturdier, gave it a boxier bottom, and added the handles from my old lunch bag. Yay! I love recycling things I love but don't use into things I will use. 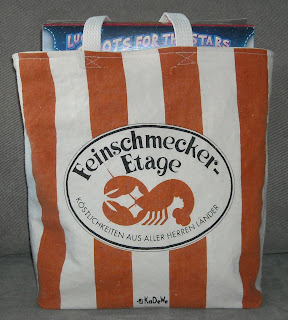 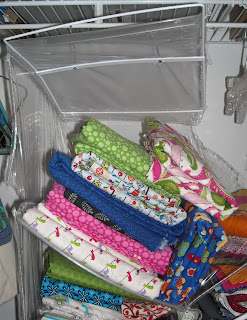 I had a minor fabric disaster. The hanging closet organizer I use to store my fabric ripped. Instead of removing the fabric first, I tried to take the whole thing down with the fabric in it. Naturally, all the fabric fell out in the process. I purchased a new organizer in the same style, but the new one is fabric instead of plastic, so hopefully it won't rip. It is not my ideal way to store fabric, since the weight of the fabric makes the shelves sag, but it works well for the space I have. I spent a lot of time refolding fabric so it would fit in two columns, but I was even able to fit in some additional fabric.

I love this design so much, I almost didn't want to send it to my sister. This brown fabric is also a leftover piece from her quilt, and I used the green fabric that she really liked but that got nixed from the final palette. 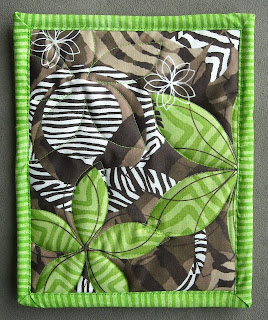 I really love the back too, which has a pocket. I like the quilted flower in the corner. 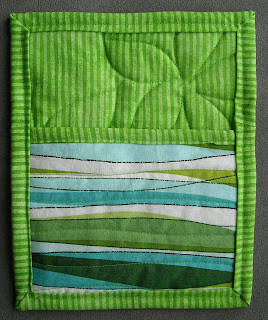 These leftovers from Julie's quilt were just the perfect size for pot holders, and I knew I wouldn't want to cut them up any smaller. I used two layers of cotton batting leftover from the one quilt I used it in. I backed them with two fabrics she vetoed for the quilt, though I hope she doesn't dislike them too much because the browns are just perfect for disguising any food spills. 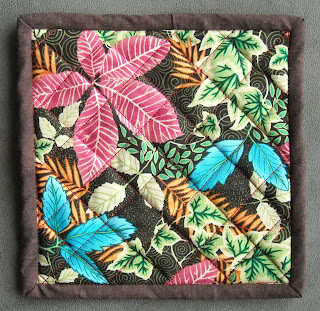 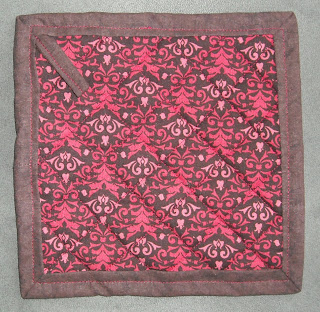 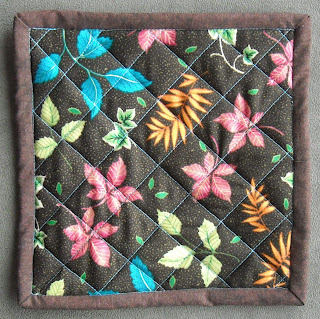 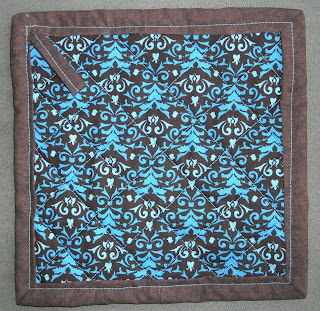 I put little hanging loops on these. I never hang my pot holders, but these are pretty enough to display.

Kitties on a Quilt 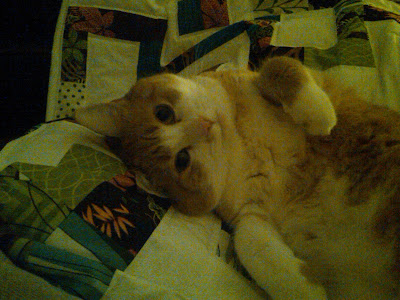 Cleo, on Julie's lap, on the quilt 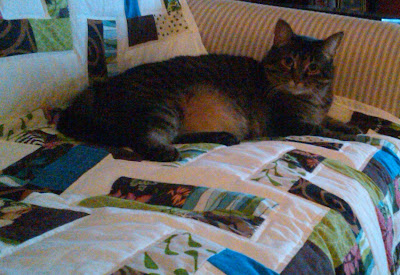 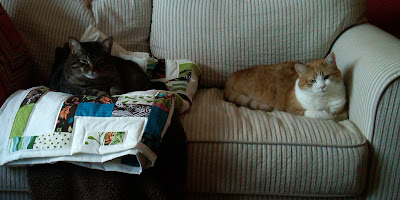 Tyco hogging all the blankies. "King of the blanket pile" according to Julie.

She said one night Tyco wouldn't come up on her lap until she put the quilt on her lap
instead of the other blanket.
Posted by Sam on Friday, March 04, 2011 0 comments

I made a second set of mice as toys for Tyco and Cleo, using a pattern with some adjustments. They are not quite as cute as the first pair.

Here are the kitties enjoying their new toys: 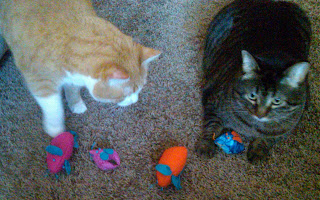