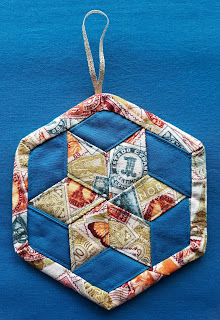 I followed a tutorial for weaving this ornament. I was able to do it without the special weaving tool, though I'm sure that would have been easier than using tweezers. I also used masking tape to hold it in place instead of pins. This is a scaled back version of the ornament in the tutorial. When I drew out the grid, I realized it would be a rather large ornament, so I made the strips 1" wide instead. It's still 5" across and 6" tall. I machine stitched the binding to the front and then hand stitched it to the back. The binding was probably trickier than the weaving, even without the special tool. It's a very reversible ornament. I used a button to attach the ribbon instead of a grommet. This postage stamp fabric was last seen in a hexagon shaped ornament in 2018. 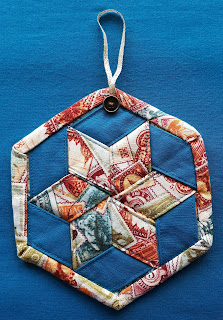